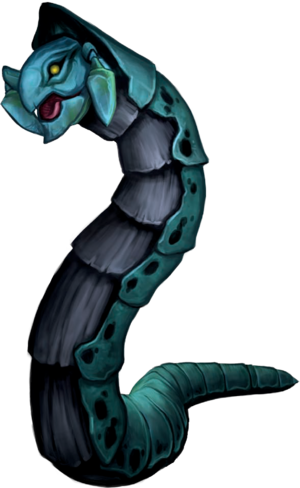 They dig narrow, barely noticeable lairs and lurk near natural caves and passageways, bursting forth when they sense any sort of motion passing by their hiding place. As a result, they almost always attack with surprise.

Rock borers are normally slow moving, patient creatures, except when disturbed or when hunting. They are stationary for over 90% of their lives, generally moving only to mate or to seek a new place to lurk in wait for food. Only when exceptionally hungry do they actively hunt. A starving rock borer attacks anything that moves.

A typical rock borer is 20 to 25 feet long, about a foot in diameter, and weighs about 400 pounds. Rock borers almost never stretch out to their full length, instead coiling their hind end (or leaving it in the ground) and raising the forward portion of their body up in the shape of an "S". This, and their thinness, makes them look smaller than they actually are, allowing them to sometimes surprise opponents with their exceptional reach.

Rock borers prefer to lie in wait for prey to pass by before bursting from their holes. While lurking, they are almost impossible to detect, although (depending on the terrain and lighting) an explorer might identify their presence by the small, largely refilled tunnels they leave behind when burrowing. Once out of their holes, or if encountered while on the move, rock borers try to back into corners where their superior reach gives them the advantage. If hard pressed, they retreat by burrowing.

Rock borers lurking in groups within individual burrows can’t communicate with each other, keeping their holes some distance apart. Thus, an attack typically commences with no more than one or two of the nearest borers bursting forth to attack passersby. In the following round or two, the remaining borers may join the fight, having been alerted by the sudden onslaught of their fellows.

A rock borer can use its burrow speed even through the hardest of natural stone, since its acid softens the stone momentarily as the borer passes through.[1]