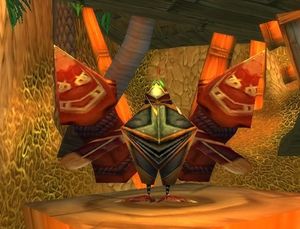 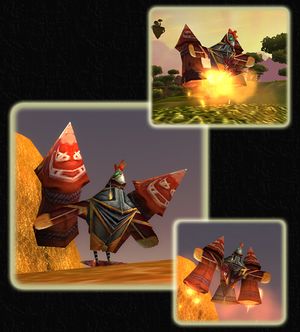 The Rocket Chicken is available only to those who receive the Robotic Homing Chicken loot card in the World of Warcraft March of the Legion TCG expansion, unscratched. Once you scratch and reveal the code, you can turn it in to Landro Longshot in Booty Bay who will give you Rocket Chicken.

It can also be listed on the Black Market Auction House by Landro Longshot, for the opening bid of 15,000

When the Burning Legion invaded Outland, Landro Longshot contributed this design to the war effort. Both the Alliance and Horde passed on production.

Occasionally, the chicken will launch up into the air using its rockets, ending with it either landing safely on the ground or comically exploding in a rain of feathers.