For the mob found in Desolace, see Rock Worm. 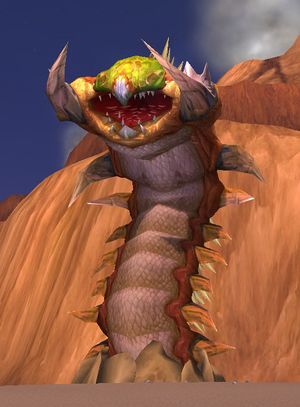 The rockworms, occasionally called centipedes[1] or sand worms,[2] are a type of segmented worm found on Draenor. They are cunning predators, striking at prey from below the sands. Many beasts of Nagrand have grown wary of the rumbling of the earth.[2]

They also appear on the Broken Isles on Azeroth.

These worms most likely became the sand worms of Outland, except for the bone worms that already existed on Draenor prior to its destruction.

They are likely related to carrion worms. They may somehow also be related to the jormungar of Northrend, since they share the same model.