Rogue tanking is the use of a rogue as a/the tank of a party or raid. However, rogue tanking was a phenomenon that is no longer practically feasible. During TBC, many bosses could be tanked with the right party/raid setup and by stacking agility/dodge rating. However, with the addition of diminishing returns to dodge rating in patch 3.0.2, it is highly unlikely that rogues can have the necessary avoidance (102.4%) at level 80. This article discusses some of the history of the use of rogues as capable alternative tanks, and describes some of the tactics and circumstances that made rogue tanking feasible. The information on this page is more for historical or nostalgic purposes.

Rogues' advantages as tanks are their high damage output, potentially extreme avoidance, and several key abilities, such as

[Evasion]. Limitations stem from their lack of AoE (since remedied with

[Fan of Knives]), inferior threat generation compared to conventional tanking classes, lack of a "taunt" ability, and poor damage mitigation in most circumstances. Also, having lower effective health means they have little hope of surviving bosses that do frequent and significant spell damage.

Rogue tanking has two objectives; becoming un-hittable and maintaining aggro. Neither of these are easy tasks to accomplish.

To become physically unhittable by a level 70 or below, you will need an avoidance rating of 100%. Your avoidance rating can be calculated based on your character sheet ingame. The formula is Avoidance=Block+Parry+Dodge+Enemy Miss Chance(5% base, increases with defense). Since rogues cannot block, the formula reduces to Avoidance=Parry+Dodge+Enemy Miss Chance. If your parry + dodge + enemy miss chance reaches 100%, you cannot be physically hit (by an attacker in front of you) at all. The avoidance necessary increases to 102.4% while fighting raid level bosses. Fortunately, the best avoidance stat to stack happens to be one of our best offensive stats as well, agility. At level 70, 1 point of agility = .025 crit, .05 dodge, 1 attack power, and 2 armor. You will need approximately 1000 agility, which will result in approximately 25% crit, 50% dodge, 1000ap, and 2000 armor. By getting your dodge up to 40% with a 10% chance of parry (5% class base and 5% from deflection), when you use evasion you will become unhittable. Now keep in mind the goal here is to become unhittable 100% of the time WITHOUT evasion, so you will need at least a 60% passive dodge chance, which is very difficult. Some key talents that will help you tank:

1. Lightning reflexes (5% total avoidance) 2. Deflection and Riposte (5% total avoidance and the ability to disarm) 3. Preparation (Double evasion) 4. Sinister Calling (15% more agility) 5. Improved sprint (So you can't get rooted, you can always get back to the action) 6. Improved Kick (silence on your kick) 7. Ghostly Strike (15% avoidance for 7 seconds (20 sec cd) 8. Blade Flurry (essential when pulling more than three mobs) 9. Setup (45% chance to gain combo point when you dodge)

The rogue must be sure to use stuns, interrupts, and avoidance abilities (

[Kidney Shot], a rogue should be able to mitigate a large share of whatever spell damage is facing them. Never use

[Evasion] except in an emergency, but

[Ghostly Strike] should be used as often as possible (that is, every 20 seconds). In addition to

[Ghostly Strike], subtlety is probably the optimal spec for basic rogue tanking because of the talents

[Setup]. Setup grants a combo point 45% of the time the rogue dodges (which will occur quite often), assisting threat generation substantially. Preparation can be used to cancel the cooldown on Evasion in a pinch, allowing for up to 30 seconds of nigh-invulnerability. Subtlety spec will also net a rogue Cheat Death if enough points are invested, which can easily mean the difference between a wipe and glorious success. Vs. a single stunnable mob, the rogue may also vanish and immediately Cheap Shot, buying time for either a heal or for their Kidney Shot cooldown to end (such that the rogue may stunlock it further).

Other than these basic strategies and spec details, the other main factor to rogue tanking damage. Besides being the only means of threat generation, it also benefits a group because the rogue is effectively both a tank and an additional damage dealer. In essence, a group using a rogue tank has one healer and FOUR dps classes, meaning mobs die much quicker. This both makes the instance run more smoothly and makes the tank's chances of survival much greater. In reality, when party buffed a rogue tank should have 100% avoidance while doing much greater damage than a prot warrior or pally could hope for. However, if another player out-aggros a mob, we do not have anything in our arsenal to regain threat other than pure damage. Since this is the case its is very wise to bring a paladin for salvation buff to put on everyone BUT the rogue. This will even the threat field. Now, just make sure you pull first and use blade flurry asap, switching targets after every finisher to cement threat on all mobs. Make your party wait about 3-5 seconds before they unleash on the mobs.

Do NOT attempt to tank a heroic instance if you do not have 102.4% avoidance. Rogues have tanked every heroic in the game, but it requires a competent party that has patience, gear, and skill. In order to reach that avoidance rating, you will want to bring:

Holy pally: Salvation on party, Blessing of Kings on you (extra 10% agility) Hunter:

Again, do not attempt if you do not have the required avoidance! Rogues do have a much harder time holding aggro in raid groups. In raids the avoidance rogue has a MUCH easier time as an OT. That way only he is on his target, dodging all attacks till the team has defeated the kill target.

Because of the ability to become fully melee invincible, in some situations rogues make far better tanks than a warrior/druid/paladin ever could. Because the rogue "avoidance tank" requires no extra healing in fights such as Gruul the Dragonkiller, Magtheridon, Morogrim Tidewalker, Sharhaz, and other melee based encounters, healers are free to better assist the raid. Note also that enrage timers can often be effectively ignored: the boss' damage may triple, but that doesn't mater to the rogue who can still dodge every swing. While total avoidance is possible in practically auction house greens with raw agility alongside defense/agility enchants, threat generation is lacking, and other classes must use abilities such as

[Insect Swarm] in order to bring avoidance over 102.4%. For these reasons, rogues must rely on gear that provides decent damage alongside equal if not better avoidance. Given high enough avoidance, a rogue may choose to use more DPS-based gear for threat purposes, substituting the use of abilities like scorpid sting for the lesser avoidance from gear. 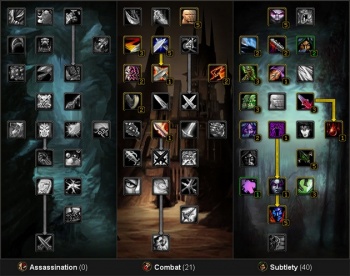 Sample Talents for Maximizing Avoidance in a Rogue tank.

Night Elves gain a 1% bonus to dodge via the racial ability quickness, and have higher agility as a base stat. However, total avoidance is still possible with all races of rogues given appropriate gear and talents.

Wrath of the Lich King; Rogues as Tanks?

Blizzard altered the avoidance formulas and mechanics in patch 3.0.2. Dodge and parry rating now have diminishing return, i.e. additional 10 agility at 40% dodge now gives significantly less extra dodge % than at 20% dodge. Therefore, it is very likely that total avoidance is impossible at level 80. It appeared that Blizzard looked disfavorably on the prospect of avoidance tanking.

From the look over the WotLK talent trees, someone may still argue that rogue tanking has partially improved. Here are the relevant new talents:

Due to the improvement of AoE threat generation, rogues are better suited for trash pulls/burst AoE threat. One can also expect some impressive defensive efforts from the

Conclusion: Despite some positive changes, 102.4% avoidance is nigh impossible given current gear levels.

While true Rogue tanking [i.e. 102.4% avoidance] may be impossible, that does not make Rogue tanking something that will never happen. November 8th, 2009, a party of 10 defeated Patchwerk, with a Rogue as the OT, soaking the Hateful Strikes. Birdcage died with Patchwerk at roughly 2% HP remaining, but the boss died with the MT surviving long enough for the DPS to finish him.

His talent spec can be seen here

Avoidance tanking can also be used in earlier WOTLK content through the use of tactics.