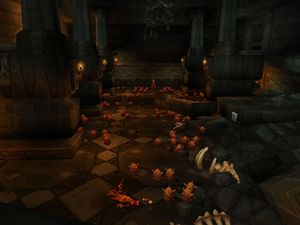 The Rookery (formerly named the Hall of Fortune[1][2]) is an area of Upper Blackrock Spire. It is accessed through the sealed door in the Hall of Binding by defeating Pyroguard Emberseer in that area. It contains a few dragonspawn guarding masses of dragon whelp eggs, which hatch if anyone comes near enough. The eggs respawn very quickly, so trying to clear the room is pointless.

This chamber also holds the

[Father Flame] event, where Solakar Flamewreath and several more dragonspawn are summoned through the use of a post at the end of the room. Needless to say, masses of hatched dragon whelps will also join in the event, which means most groups will skip it altogether since it is entirely optional.

The Rookery leads on to the upper levels of the Hall of Blackhand which is accessed by ascending the Rookery ramp and entering through one of the hall's two doorways.

This particular room is well-known for the Leeroy Jenkins film clip incident, when he and his guild <PALS FOR LIFE> famously wiped due to Leeroy's incompetence. The video was first posted to the official forums under the topic title "UBRS (vid) ROOKERY OVERPOWERED! blue please."[3] in which the video participants make an impassioned appeal to Blizzard to lower the difficulty of the Rookery because they were unable to handle all of the whelps, despite their formidable AOE fear rotation. The obvious solution (and nature of the joke), of course, is that the Rookery is trivial if you step on as few eggs as possible.

The title "<name> Jenkins" from the

[Leeeeeeeeeeeeeroy!] achievement is in honor of the character and video.