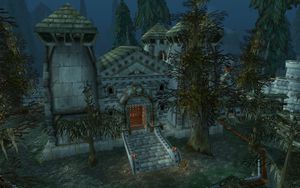 Rot Hide gnolls are, like many other creatures in northern Lordaeron, an undead group[1] that were unable to escape the Lich King's Plague. Now a number of them serve as undead minions to the Scourge. They are given life by

Most of the gnolls are committed to looting corpses[3] for the Scourge. They are located mostly around abandoned farms, forest deeps, and their main capital Fenris Keep on Fenris Isle, where they are led by Thule Ravenclaw. He leads the Rot Hide gnolls in their forays against the Forsaken, and crafted the

[Rot Hide Ichor] through warlock and necromantic magic[4] that flows through their bodies.[5]

After the Shattering, they were driven out of Fenris Keep and many members have been killed, such as Snarlmane. However, the tribe is still present in Tirisfal Glades, such as Maggot Eye. Their leader, Thule Ravenclaw, is still alive in a small camp in Silverpine Forest.

At first glance, this creature seems to be a common gnoll, but further inspection reveals that its withered skin stretches tightly over prominent bones, rotted flesh shows beneath its patchy fur, and its eyes glow dark red or yellow, and are rheumy and sick-looking.[6] Rot Hide gnolls combine the strength and aggression of regular gnolls, amplified by their undead status, with a lack of the cowardice that gnolls often exhibit. Rot Hide gnolls possess little intelligence and even less subtlety. They charge into battle, using their powerful attack to its fullest degree, and change targets at random.[7] No one seems to know where they came from. The Rothides and the Forsaken wage a constant guerilla war against each other.[6]

The Rot Hide gnolls may have been an already existing tribe before the Plague, or Mudsnouts that have fallen to the Plague. The Mudsnouts seem to be the only tribe of gnolls native to Lordaeron, and the Plague would account for their low numbers.