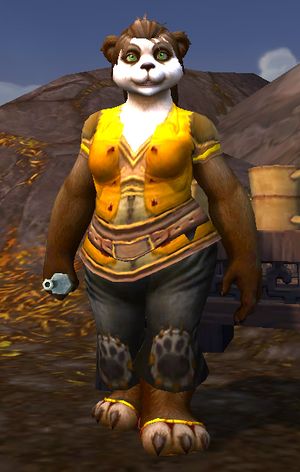 Welcome, Challenger, to my tournament of champions! Today we test the strengths of Pandaria's most dedicated heroes.

Your first opponent awaits you under the eastern gazebo. Defeat her, and you may proceed to the next round.

Fight with strength, fight with honor.

(Brewmaster Chani: "New to her status as a Brewmaster, her brews are painfully bitter.")

Without conflict, there can be no growth.

The need to change, to persevere, to improve, these are the traits that bring champions to my doorstep.

Fly northeast. Xuen has somehow gotten there instantly, but Chani is underneath the gazebo, drinking. She is a level 90 pandaren with 1,181,000 health and the following abilities:

One sip of my brews and you will see how unworthy you really are.

Chani generally uses her two ranged abilities, keeping her conveniently rooted on the ground. Either kite her around, using the four corner pillars that block line-of-sight, or just dodge the keg bombs and get behind her when she casts the steamer.

Head just to the northwest of the gazebo to turn in to Xuen.