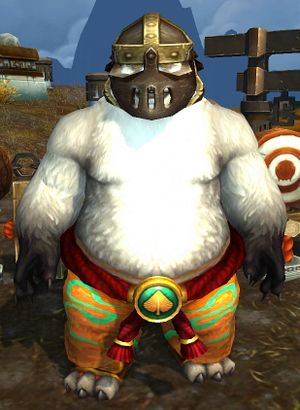 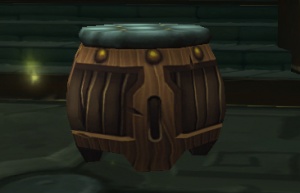 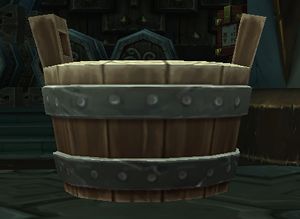 Your next challenger is a favorite of mine. He draws strength from raw force and determination.

Plus he has a mask.

Face him in the western arena when you are ready, and good luck.

(The Wrestler: "He never removes his mask.")

Sometimes strength can come from the outside.

Well fought, challenger. That was a fierce opponent.

Cross to just west of the main temple. The arena has some additional functionality: A number of chairs can be interacted with to stun and weaken the wrestler for 10 seconds and 200% bonus damage taken, and there is a bucket next to Old Hat that can be used to heal, restoring 3% health and mana per second while seated. Old Hat has some quick advice:

The Wrestler took out my old apprentice. Now you shall be my apprentice. You smell of luck... and sweat. Most good fortune indeed!
The Wrestler is slow but strong. Do not let him grab you.
Also, his mind is weak. Use the chairs in the arena to stun him.
If you get weak, use the bucket next to me for refreshings.
Good fortune to you, apprentice of grummle!

The Wrestler is a level 90 elite male pandaren with 1,969,000 health and the following abilities:

On entering the arena:

Old Hat says: Old Hat is the most good coach. <Name> would be a luckydo to listen to my advice.

The fight begins instantly. The Wrestler moves slowly but must not be allowed to stay in melee range for long while not stunned. Quickly run to a chair and toss it at him for a ten-second stun and some bonus damage. As the buff is about to expire, run to another chair and interact with it shortly after the stun wears off, then repeat. The chairs take about a minute to respawn, but there are plenty in the room. If necessary, stun the boss and use the refreshing bucket near Old Hat for a 3%/sec heal while seated.