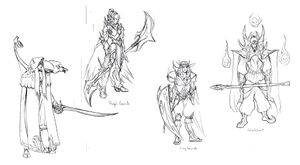 Blood elf concept arts, among them a Royal Guard.

They guarded the bridge in the Court of the Sun during the closing of the remembrance ceremony.[1]