Not to be confused with Royal Quarters. 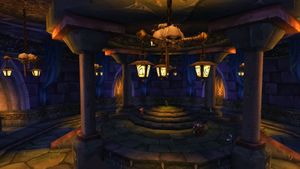 The Royal Quarter (or the Hall of the Dark Lady)[1] of the Undercity contains the throne room where the Dark Lady Sylvanas Windrunner controls her burgeoning empire of undeath. This room, which is guarded by elite Royal Dreadguards, originally contained the battlemasters for the city.

Varimathras was originally found here alongside the Dark Lady, but he betrayed the Horde alongside Putress causing the disaster at the Wrath Gate, prompting the Alliance and Horde to launch a counterattack. The Horde fought through the city, entering the Royal Quarter filled with demonic portals channeled by Varimathras for the minions of the Burning Legion. Several bodies of the royal dreadguards were also seen on the ground. In the aftermath of the defeat of Varimathras and the summoned minions, King Varian Wrynn and his Stormwind Elites entered the chamber and attacked Warchief Thrall and Lady Sylvanas only to be frozen by Jaina Proudmoore and teleported to Stormwind City.[2]

Since Varimathras' defeat, Bragor Bloodfist has also been assigned to this area to assist the Dark Lady.[3]

During the Burning Legion's third invasion, a ceremony of the Horde leaders was held here.[4]

After Sylvanas left for Orgrimmar to lead the Horde, a new governing body called the Desolate Council ruled from the throne room as well, with its leader, Vellcinda Benton standing in Sylvanas' spot.[5]