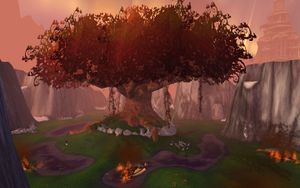 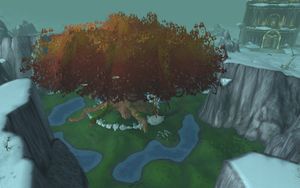 The Ruby Dragonshrine is the final resting place of the red dragonflight. Nozdormu tells adventurers that it was formed when a single drop of Alexstraszas blood melted the snow and birthed the Crimson Oak that stands in its center.[1] Under attack by the Scourge, both the Alliance and the Horde have sent squads to assist the red flight.

Located on the western edge of The Dragon Wastes, south of the Obsidian Dragonshrine, north of the Azure Dragonshrine, west-northwest of Wyrmrest Temple, just to the northeast of Snowfall Glade, and southeast of Agmar's Hammer. The Area is guarded by Ruby Watchers.

Dahlia Suntouch was the dragonshrine's previous keeper until she was slain at the feet of the death knight Orbaz Bloodbane. 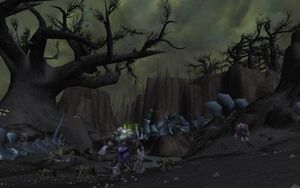 During the events depicted in the End Time instance, the dragonshrine is devoid of life and swarmed by the undead. The Echo of Sylvanas can be found here.

Nozdormu has this to say about the dragonshrine when players arrive:

What lies before you is the aftermath of Deathwing's reign. What was once the Ruby Dragonshrine now lays in waste, its charred husk and scorched earth the only testament to its existence.

It is said that, long ago, a single drop of Alexstrasza's blood melted away the snows of and gave life to the great Crimson Oak that stands before you. Its branches raised triumphantly into the sky and radiated the warmth and life of the Red Dragonflight.

But now, its twisted, rotting limbs can no longer harness the power of life and vitality - instead only death and destruction. As flame and corruption extinguished the life force of these lands, the great tree captured an image... an echo of the warriors who fell on its hallowed grounds.

At an undisclosed point in the future, the Ruby Dragonshrine comes under attack by the Scourge once again. Talar Icechill plots the death of Chronormu.