The Ruby Sanctum is the red dragonflight's sanctum within the Chamber of Aspects beneath Wyrmrest Temple in Dragonblight. It is accessed via a crack in the ice following the Path of the Titans. It is a raid dungeon with both 10 and 25-player normal and heroic modes.

The dungeon's release was delayed until patch 3.3.5a was released in Europe, a week after the US release, in an effort to make sure all players world-wide could access it at the same time. Even so, a large number of both US and EU realms were down for a 24-hour maintenance when the raid was opened.[1]

When a clutch of twilight dragonflight eggs was discovered within the Obsidian Sanctum, Korialstrasz asked the Council of Six to send adventurers to destroy them. The deed was done quickly, and without fanfare or acknowledgment. At first all seemed quiet, but then all communication with the guardians in the Ruby Sanctum ceased. The guards stationed at the portal were slain, and the mystic stones shattered. The implications of the Ruby Sanctum being breached are dire, and little is known of the identity of the attackers, as the black dragonflight's numbers in Northrend seem too limited to have pulled off such an attack. What power would dare to attack the stronghold of the red dragonflight, and how did they get past the guards undetected?[2]

The black dragons' targets were the red dragons' eggs.[3]

Some time after the Shattering, the Twilight's Hammer invaded the Ruby Sanctum in order to corrupt the eggs within. Korialstrasz was forced to destroy both himself and not only this sanctum but all of them in order to stop them, leaving nothing behind except traces of the energy used to destroy them.[4]

The Ruby Sanctum was eventually rebuilt and used to store the very last red dragon eggs and whelps there would ever be.[5][6] This was probably done before the Dragon Soul raid, as after that the dragons became sterile. Either that, or the eggs existed before the raid in other locations and the sanctum was rebuilt to keep them safe after it became clear there would be no more.

The Deathlord of the Knights of the Ebon Blade travels to the rebuilt[5] Ruby Sanctum to obtain information on a great dragon skeleton north of Icecrown. The Lich King gives the Deathlord the option of either sparing some dragons within, or slaying them all. However, the dragons are aggressive to the Deathlord regardless.[7] 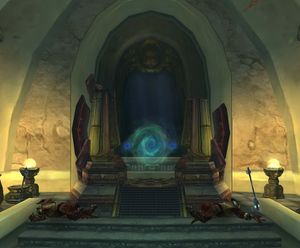 The black dragonflight has assaulted the sanctum and is attempting to destroy it to facilitate Deathwing's reemergence into Azeroth. Halion will be the primary encounter, along with three mini-encounters that must be completed prior to him. Unlike the Obsidian Sanctum, there are no progressive hard modes from leaving up some or all of the minibosses. Loot is comparable to that of The Lich King. Heroic Encounter of Halion Item Level 284, possible end-game content until the release of Cataclysm. 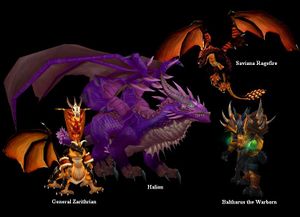