Were you looking for information about ruins?

This is a formula that calculates how much of a boost (over a large number of spell casts) in damage you can expect to get from this talent when using spells that can crit. The formula uses the "three outcomes" model, as well as a concept from probability theory called expected value. This calculation does not take into account resists and partial resists.

The "three outcomes" model states that in WoW, when one casts a spell there are three possible results: a hit, a critical hit (crit), or a miss. If we know the probability of each outcome, we can use probability theory to calculate the expected value of damage. Then, we can calculate the percentage difference in damage we can expect to see from various crit rate/hit rate combinations.

[Ruin], the expected amount of damage one does with spells is:

The percentage difference would be:

This expression simplifies to:

Essentially, this result states that the increase in long term damage you get from this talent depends on two variables. The first variable is C, your crit rate. The other variable is H, your chance to hit.

The role that your chance to hit plays may seem counter-intuitive (i.e. lower hit rates leads to higher bonus). This is a consequence of the "three outcomes" model. Crits and hits share the same "probability space", and therefore hit rate puts a cap on crit rate. It must be thought of in this way: if you are missing more often, then the critical hit to "normal" hit ratio is higher.

[Ruin]. One has to realize that if you are missing more often, you are doing less damage. Overall,

[Shadow Mastery] has on shadow spells. 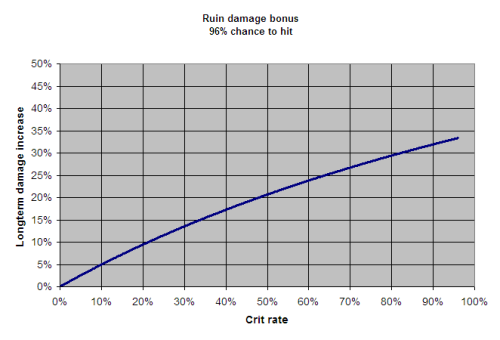 Against enemies that are the same level as you, you have a 96% base chance to hit.