This article is about the in-game ruins. For the history before the ruins, see Capital City. For the arena, see Ruins of Lordaeron (arena).

The Ruins of Lordaeron (or Lordaeron Keep,[1] also called Ruins of Capital City[2] and Capital City Ruins, and sometimes referred to as Lordaeron City)[3] is all that remains of the city of Lordaeron, the great capital city of the Kingdom of Lordaeron. Now it serves as a sad reminder of the power of the Scourge. The area is literally haunted by the final tragic events that led to the death of King Terenas and the city's destruction. The ruined palace still stands.

After the events of the Battle for Lordaeron, the Forsaken lost control of the ruins and the city was further devastated and completely blighted. The ruins can be flown over afterward, but getting too close to the ground will rapidly kill the player due to the blight.

For the lore before the ruins, see Capital City. 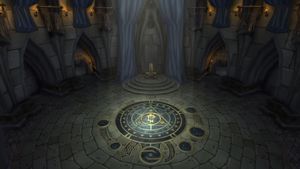 The throne room of Lordaeron. 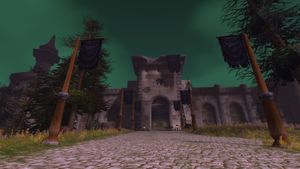 The entrance to the Ruins of Lordaeron in Classic.

After the massacre of its citizens at the hands of the Scourge and the destruction of the city and its Alliance defenders, the ruins were overseen by Balnazzar, Detheroc, and Varimathras. When Arthas returned from Kalimdor, he ousted the dreadlords and named himself King of Lordaeron.[4] When Ner'zhul recalled Arthas to Northrend, Balnazzar took control over the city once again. The combined forces of Grand Marshal Garithos and Sylvanas Windrunner defeated Balnazzar, at which point Sylvanas betrayed her allies and took the city for herself.[5] The Undercity, which lies beneath the ruins of the city, became the capital of the Forsaken.

To this day you can still hear the moments before King Terenas' death; hushed whispers in the courtyard, the clanging of bells in the entryway, the faint cheer echoing the welcome of Prince Arthas, and the murmur of voices in the throne room. One such sentence that is uttered says "This kingdom shall fall, and from the ashes shall arise a new order that will shake the very foundations of the world." — Arthas after slaying his father, and proclaiming the Scourge's invasion and victory over Lordaeron. If you can detect invisibility, you will see the ghosts of the citizens of Lordaeron still haunting the castle's courtyard. Beneath the ruins now lies the Forsaken capital city — the Undercity, where the dark queen prepares to conquer the lands to the east and south.

The lands outside the ruins are no longer full of cheerful people enjoying the sun, but with demons such as Darkhounds and Duskbats and the Scourge lurking nearby at the borders of the Plaguelands.

Prior to the start of the invasion of Outland, the gates of Lordaeron were invaded by a group of Burning Legion demons led by Highlord Kruul.[6]

A new section of this zone holding an Orb of Translocation was added that connects the Undercity to the blood elf capital of Silvermoon City for those with the Burning Crusade expansion. Additionally, an Arena was added.

The Horde forces led by Thrall and Sylvanas battled through the entrance against Varimathras's demons. 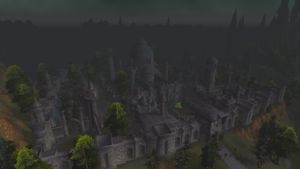 Overview of Ruins of Lordaeron in Cataclysm.

The city received an overhaul and is finally completely visible to players due to the addition of flying mounts to the Eastern Kingdoms. The architecture of the Ruins of Lordaeron as well as the Undercity was not heavily changed in Cataclysm, however, it was updated to allow flying mounts. Little Forsaken presence could be seen here until patch 4.2.0, when the area was populated with Forsaken Citizens and Kor'kron Overseers. Apothecary Initiates were also added near the plague wagons.

Since the fall of Garrosh Hellscream in the Siege of Orgrimmar, the Kor'kron Overseers have left the Undercity and the Ruins of Lordaeron, and the abominations have returned to their posts as Undercity Guardians.

The siege of Lordaeron.

At present day, it is occupied by the living skeletons that fell during the siege.

Lordaeron's capital city stood for centuries, a monument to humanity's might. In the Third War, Prince Arthas slew his father King Terenas in Lordaeron's throne room and ransacked the city. He planned to use Lordaeron as his capital on this continent and ordered his minions to expand the catacombs beneath the city. Then the Lich King summoned Arthas to Northrend and the work was left uncompleted.

During Arthas' exodus, Sylvanas Windrunner broke free of the Lich King's control and took many banshees and other undead with her. With Varimathras' assistance she defeated the dreadlords that controlled the city and set her newly dubbed Forsaken to finish Arthas' job in the dungeons. The Forsaken carved Undercity and now rule the surrounding countryside.[7]