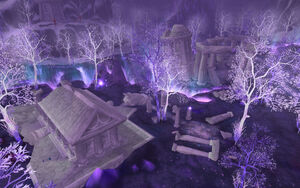 An aerial view of the Ruins of Shandaral.

The Ruins of Shandaral are the remnants of an ancient kaldorei city located in the eastern part of Crystalsong Forest, in the center of the Unbound Thicket. 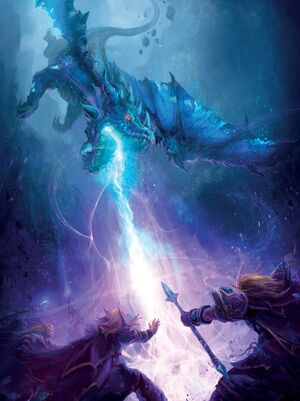 The blue dragons descending upon Shandaral

The outpost of Shandaral was established during the height of the Kaldorei Empire, around 10,000 BDP, in the northern reaches of Ancient Kalimdor. It was to be a repository of arcane relics and artifacts that the Highborne collected. When the continent was shattered by the Great Sundering, the elves living there were isolated from the rest of the world. With no source of power to sustain them, they were left vulnerable to disease and other ailments. For centuries, the Shandaral Highborne scoured the forests of Moonsong for a means to sustain themselves.[1]

Around 6,000 BDP, after witnessing blue dragons crystallize living things and draw power from them, the elves tried to interact with the dragons, who responded with either ignorance or open hostility. Out of desperation, a group of Highborne sorcerers infiltrated the Nexus and learned the dragons' techniques, but greed pushed them to pilfer some of the powerful relics stored in the blue flight's lair. This triggered magical wards which sent the blues into a frenzy. Though the elves managed to escape with their lives, they knew that the dragons would retaliate.

Dozens of blue dragons indeed came down upon Shandaral. The elven sorcerers, desperate to save themselves, gathered on a cliff overlooking Moonsong, and agreed to use techniques they had acquired from the Nexus. They focused their power, hoping to crystallize a small portion of the forest and use its energies as a weapon to destroy the dragons. Their attempt failed horribly, as their reckless casting set off an enormous explosion, releasing a torrent of energy that crystallized the entire forest.

The physical form of every living creature in the region, except for the blue dragons who had sensed the impending spellwork and left, was instantly shattered, while their spirits were warped by the spell and cursed to mindlessly wander the haunted land which would become known as Crystalsong Forest.[2]

The Ruins of Shandaral are a night elf archaeology dig site.