The Ruins of Southshore are all that remain of the human port town of Southshore, one of the last intact Alliance towns in Lordaeron.

It is now controlled by the Horde and serves as a quest hub, complete with a flight master. Blight Slimes, Angry Blight Slimes and a unique ooze named Chet the Slime-Breeder infest the ruins. 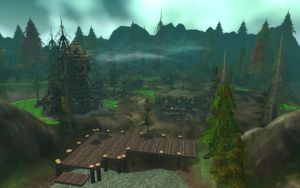 The Ruins of Southshore.

Southshore was a well known supply port and a possible staging ground for the Alliance military in the new war, a hindrance to the Forsaken's territorial expansion. As such, Southshore was attacked and destroyed by a potent strain of the Forsaken's New Plague, despite the orders of the Horde leadership to use only diluted versions[1] after the Wrathgate incident. The potency of the blight used is dubious, as even the Forsaken responsible for it express mild surprise at how effective it was.[2] The town leadership led those who could escape to Fenris Keep in Silverpine Forest,[3] but some other inhabitants weren't so lucky as the residents were no match for the Forsaken's chemical weapons.[4]

Southshore was rendered uninhabitable after this, as highly toxic blight remnants were left spread throughout the ruins. The Forsaken took partial control of the ruins but due to the toxicity of the blight, the land would be inhospitable for a hundred years or so.[2] Dark rangers patrolled the roads nearby with domesticated spiders and were occasionally found battling Bloodfang Forsaken Hunters.

During the Legion Invasion, Wyrmtongue Harvesters were sent by the Burning Legion to the Ruins of Southshore in order to harvest remaining Blight Samples.

Raleigh the Devout survived the destruction of Southshore and, years later, returned to clear it of the blight with a cadre of paladins. The Horde tried to enrage the blight creatures to disrupt their efforts.[5] The Alliance troops blew up the Horde apothecary experiments about weaponizing the blight infecting the ruins and encountered Master Apothecary Faranell.[6] 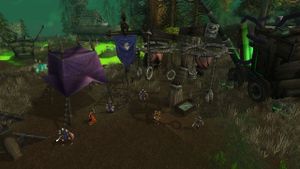 The flight path in the Ruins of Southshore.