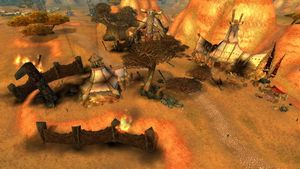 The Ruins of Taurajo are all that remain of Camp Taurajo after its destruction by the Alliance. Following the burning of the camp, the tauren have constructed a high gated wall between the Southern Barrens and their homeland of Mulgore. The survivors, along with some of the survivors of Honor's Stand, have fled to Camp Una'fe ("Una'fe", fittingly, means "refuge" in taur-ahe) in the Overgrowth. Some other survivors left for Vendetta Point.

While the village may be destroyed, the mailbox here still works for Horde characters. Taurajo Looters are Alliance soldiers who broke rank from the main army and are found stealing whatever valuables they can find from the wreckage.

During the Cataclysm, Camp Taurajo was assaulted by the Alliance when all hunters had left[1] and firebombed by Wildhammer mercenaries.[2] In order to secure their offensive against the Horde, the Alliance, expanding from Northwatch Hold under false information that the tauren were planning an attack, razed Camp Taurajo in a massacre.[3][4]

General Hawthorne, who led the assault, had nonetheless ordered his men to give the townsfolk an opening in their defensive lines for the civilians to escape. Baine Bloodhoof believed that Camp Taurajo was a legitimate military target,[5] as the camp trained hunters and warriors,[6] and the tauren army only moved in after the late General Hawthorne had ensured that the civilians of Camp Taurajo would be allowed to leave unharmed, as he didn't give the order to massacre anyone and refused to slaughter civilians.[7] The survivors, along with some of the survivors of Honor's Stand, fled to Camp Una'fe in the Overgrowth.

After the attack, the road to Mulgore from the Barrens, which had once been open, was closed with the Great Gate, shutting out any possibility of a massive Alliance incursion. Most tauren were content with that decision and did not burn for revenge, but the Grimtotem who disagreed, and other tauren who chose to strike back at the Alliance military from Vendetta Point, were expelled from Thunder Bluff. He could not truly condemn his people, however, so they suffered no other repercussions.[8] The tauren also started rebuilding their capital and fighting back the quilboar who had started encroaching on their territory.[9]

The Great Gate was later threatened by Alliance soldiers.[10]

After taking care of the Alliance forces stationed on the other side of the Great Gate, the Horde army, led by Vol'jin and a reluctant Baine Bloodhoof, marched east, passing through the Ruins of Taurajo and the Fields of Blood towards Northwatch Hold.[11]

During the Blood War, the area was a battlefield between the Alliance and Horde once again. Commander Sharp and Kary Thunderhorn were among the known participants.[12]