For other uses, see Thaurissan. 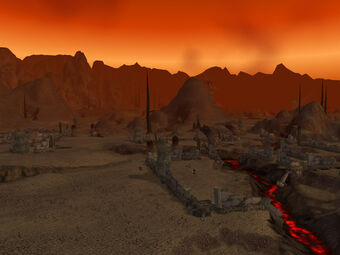 The Ruins of Thaurissan are what remains of the Dark Iron clan's original capital city. Little is known of the great city, but Royal Historian Archesonus of Ironforge has led research into its ruins found in the Burning Steppes, to reveal some information about the place. It was referred to as the home of the Dark Iron nation and later kingdom.[1] 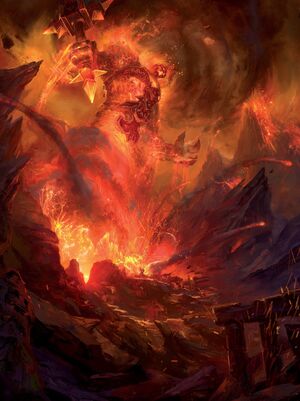 The summoning of Ragnaros. 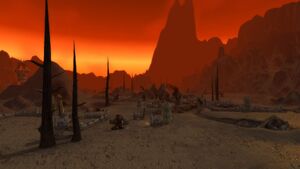 About 200 years before the opening of the Dark Portal, Sorcerer-Thane Thaurissan's namesake city[2] stood as a proud settlement in a lush expanse of land that would later become the dilapidated Burning Steppes. Thaurissan was home to the Dark Iron clan, and at the time they were in the midst of a civil war with the dwarven nation at large. The city was founded when the Dark Iron clan became exiled from the historic dwarven capital of Ironforge, and Sorcerer-Thane Thaurissan led his people south into the Redridge Mountains.[1]

The Redridge Mountain Range's northern reaches later came to be utterly destroyed by Sorcerer-Thane Thaurissan in an inadvertently self-destructive act that cost his people their freedom: The Dark Iron army had just been wiped out in invading the other two clans' capitals, and the Sorcerer-Thane sought to summon a supernatural minion that would turn the tide of the war back to his favor. He and seven of his most trusted and powerful dwarves called upon the ancient powers sleeping beneath the world. To their surprise, the creature that emerged was more terrible than any nightmare they could have imagined: The ancient Firelord Ragnaros.[3]

The Firelord's return was marked by the eruption of a giant volcano, which reduced the lush surrounding valleys and steppes to an ashy wasteland. Thaurissan was obliterated, and the surviving dwarves were enslaved by Ragnaros and his minions. Abandoning the ruins of their city, they built a new home under the Blackrock Mountain called Shadowforge City. From the ashes of Thaurissan rose the Blackrock Spire and the new Dark Iron nation. After their revival, the dwarves' focus turned north towards the Cauldron.[1]

An Alliance expedition was commissioned to find mysterious relics rumored to still lie within the ruins of the city. Though all relics were uncovered, none of them could be brought back in one piece. Nonetheless, the information they magically revealed was still priceless. Merely touching the relics caused memories of the destruction of Thaurissan to overwhelm the explorers, flooding their sights with visions of the terrible ruin wrought upon the city.

Notes taken by the explorers are recorded here:[4]

Around the time of the Cataclysm, the Thorium Brotherhood built the settlement of Chiselgrip next to the ruins. The Royal Historian Archesonus returned to Ironforge, and the dig site was opened to adventuring archaeologists.

The Ruins of Thaurissan are a dwarven archaeology dig site. For 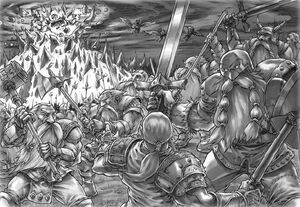 The summoning of Ragnaros.

The Ruins of Thaurisan are a mockery of dwarven settlements named after the first pretender who titled himself the Dark Iron king, the sorcerer Thaurisan.

After being exiled from Ironforge, the Dark Irons left Khaz Modan and built this city in an area of the Redridge Mountains that would later be known as the Burning Steppes.

During the War of Three Hammers, the Ironforge and Wildhammer forces defeated Thaurisan's armies and pushed him back to the Redridge Mountains. Seeing he was doomed, Thaurisan decided to summon a magical creature to aid his Dark Irons. Yet he inadvertently summoned Ragnaros, a blazing elemental lord whose birth tore the land asunder. This cataclysm destroyed all three dwarven armies, including the city of Thaurisan, and in its place was a great volcano that dwarves would later name Blackrock Spire.

Ragnaros bent the remaining Dark Irons to his will, and he and his new servants retreated to the safety of the Blackrock Spire's depths.[5]