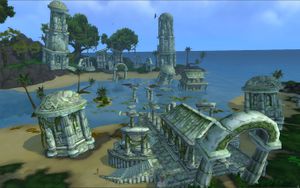 Ruins of Vashj'elan is naga infested Highborne ruins located in southern Lost Isles. Faceless of the Deep is the leader of the naga in these ruins.

After the volcano erupts the naga abandon the ruins and their spawning grounds.

As the name suggest these ruins could be connected with Lady Vashj. As chief among Queen Azshara's handmaidens, it is possible these ruins were built in her honor, and served as relaxation. It is also possible that they were related to one of her relatives. The ruins may be a part of Vashj'ir that was separated during the Sundering. They may also be a part of Zin-Azshari, given the proximity to the Maelstrom. But if so, the connection to lady Vashj is unknown.