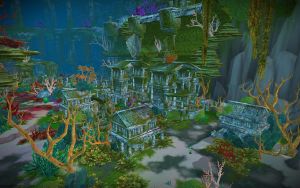 The lower section of the Ruins of Vashj'ir.

Ruins of Vashj'ir are the ancient highborne ruins of the once-majestic city of Vashj'ir. It is the current stronghold of the naga within Vashj'ir. The massive ruins are found in southwestern Shimmering Expanse and are divided into three tiers:

According to a chain of flashbacks beginning with

[81] Visions of the Past: The Invasion of Vashj'ir, Varkul the Unrelenting leads a huge army and claimed the then abandoned Ruins of Vashj'ir. Both he and his Kvaldir were defeated by an army of naga led by Lady Naz'jar and Fathom-Lord Zin'jatar.