Runas the Shamed is a nightfallen located in Azsuna.

Like many of his kind, Runas is an exiled nightborne who has been slowly withering away without the Nightwell. To fight against the hunger, he traveled to Azsuna and has been hunting down blue whelps to keep himself sustained. After being confronted by Stellagosa, he agreed to help the blue dragonflight against the withered. He did this by taking them to the Ley-Ruins of Zarkhenar, where the nightborne were pulling the ley energies from the ground of Azsuna, while clearly losing his mind without the

[Ancient Mana] to sustain him. Fortunately, he managed to obtain some Charged Mana Jewels, to keep him from turning. After helping the dragon gain their mana back to their old leader by destroying the Mana Pylons, his need for mana came back.

Returning to the Azurewing Repose after learning of a withered attack, he places himself in the dragon's pools and slowly withers away. 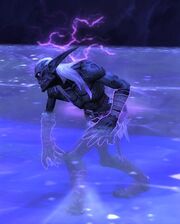