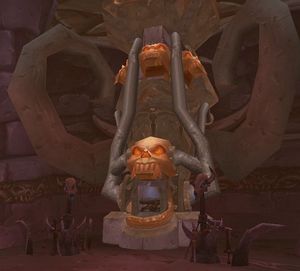 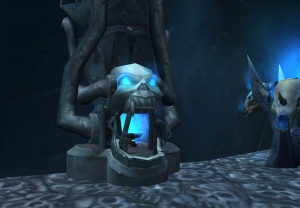 A runeforge is a special type of forge used by death knights to emblazon their weapon with runes. A runeforge is required to modify any runes already in your weapon (done via

[Runeforging]). Runeforges are initially found in Acherus: The Ebon Hold, set around the upper chamber (accessable by teleporter). There are additional runeforges at the Shadow Vault and the fortress at Mord'Rethar: The Death Gate in Icecrown, but the buildings are inhabited by many hostile mobs. The Shadow Vault can later be captured in a small quest chain, transforming it into a quest hub for the Knights of the Ebon Blade and allowing ease of access to the Vault's runeforges. There is also a runeforge inside Icecrown Citadel, near where Darion Mograine stands in Light's Hammer. This runeforge is also used by warriors and paladins as well as death knights on the quest

There are also runeforges inside Naxxramas, but they are unusable by players.

The Soul Forge is an improved version of the standard runeforges.