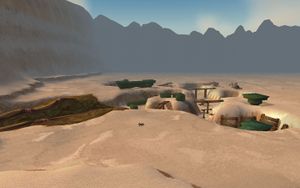 was an abandoned dwarven digsite in the Shimmering Flats. The Explorers' League was in the process of uncovering some ruins when a war party led by Moktar Krin attacked them, killing them all.[1][2] The battle apparently stirred up a nest of silithid creatures from a cave in the dig site. The continuous swarm of insects that erupted drove the already weakened war party off.

The surviving members of the Horde war party can be found at Ironstone Camp, while some did manage to make it to Orgrimmar. When the Shattering caused the flooding of Thousand Needles, the dig site was lost and the Silithid creatures borrowed underground. The area was renamed to Sunken Dig Site.