Rut'theran Village was a village port for the night elven city of Darnassus, located at the very bottom of the World Tree Teldrassil. There is a portal here that goes directly into Darnassus, as well as three docks with regular boats going to the Exodar and Stormwind City. There is also a hippogryph roost that goes, for free, to both Darkshore and, for druids, Moonglade in Northern Kalimdor. The Midsummer Fire Festival braziers are lit here. 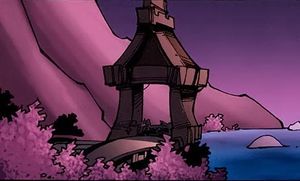 Rut'theran Village as seen in World of Warcraft: The Comic.

During the Cataclysm, several parts of the village were destroyed, five residents lost their lives, and the Darkshore town of Auberdine was destroyed as well. Some of the services in Rut'theran were relocated to other parts of the now shattered island, and docks were added for the destinations previously reachable from Auberdine.

During the War of the Thorns, Malfurion Stormrage and Delaryn Summermoon arrived here to meet the night elven forces.[1]

Rut'theran Village was then struck first by the siege weapons, its crowded docks engulfed in flames. Kaldorei civilians that did not die immediately would only drown in the surrounding waters. The village, along with the rest of Teldrassil, would be utterly destroyed within the hour of its burning.[2] 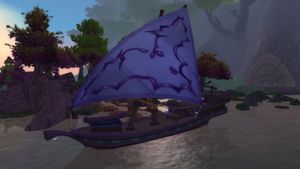 A ship docked at the village, presumably The Moonspray.

The boat on the eastern dock is permanently berthed and doesn't go anywhere. In the Cataclysm beta, this was where worgen characters disembarked after leaving Gilneas for the main world, but at some point it was changed to the western dock.

Rut'theran's harbor lines the roots of the grand tree, and this humble but friendly village provides just a taste of the majestic locations held in Teldrassil's mighty branches. Boats and hippogryphs carry passengers between Rut'theran and Auberdine. This is one of the primary breeding grounds of the hippogryphs, and eggs from all across Kalimdor arrive here for care. Inside Rut'theran is a shimmering portal that leads to Darnassus, far above.[3]