Rylaks are a type of two-headed, flying predators and scavengers native to Draenor. Though seemingly extinct in the main universe, they are still common on the alternate Draenor and are frequently captured and ridden by the Thunderlord orcs and other members of the Iron Horde.

The versatile, flying rylak have adapted to climates across Draenor, but their greatest density is in Frostfire Ridge. Here, warm volcanic stone ledges make for excellent nesting sites, while snowy featureless expanses serve as prime hunting grounds for these ferocious predators to seek flesh with their dual sets of eyes and nostrils. Their thick hides protect them from the elements, as well as from the arrows of frustrated hunters. Adventurers seeking to display a two-headed rylak trophy should remain wary of both sets of fangs... and those seeking to tame a new mount should consider the Iron Horde's tendency to armor the largest rylaks and lead them into combat.[1] Mulverick is one of few Frostwolf orcs to have mastered the art of rylak riding.[2][3]

The Blackfuse Company, allies of the Iron Horde, are enslaving the rylaks dwelling at Darktide Roost, off the southern coast of Shadowmoon Valley. 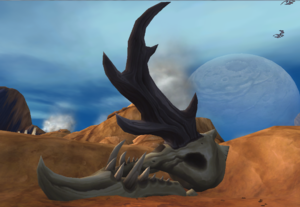 A skull found in Gorgrond.

In the main universe, the rylaks of Gorgrond were tamed and ridden by an orcish clan referred to as the Nelghor-shomash ("Cry of the Beasts"), later known as the Dragonmaw clan. The Dragomaw fondly referred to their rylak mounts as nelghor, or "loyal beasts". When the clan later ventured to Azeroth and encountered dragons, it would apply the term nelghor to them as well, and all orcs would eventually refer to dragons as nelghor. The name of the Dragonmaw clan never changed, but its meaning surely did.[4] After the Old Horde had conquered much of Draenor, the threat of starvation caused the orcs to hunt most of Draenor's native creatures to extinction. The Dragonmaw turned on their trained rylaks and used them as a source of food.[5]

One of the most ancient and powerful types of rylaks are the black variants, living in the highest reaches of the Stonefury Cliffs.[6] 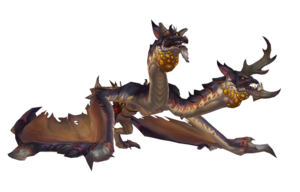 A brilliant ogre once had a thought that riding a rylak would make travel much faster than using pack animals or walking. Roughly crafted from thick leather and utilizing an excessive number of knots, a special seat could comfortably accomodate an ogre. However, it could only be saddled on a rylak the size of a small mountain which seems to explain why no one has ever seen ogres fly.[7]

Interestingly, the rylak known as Roardan the Sky Terror apparently has feathers and is called a "bird" by both Durotan and Maraad.[8] Rylaks lay eggs[9] and collect an immense amount of fur when building their nests.[10]

During the war in Draenor, several of them have been moved with the Ironmarch army to Blackrock Spire in Eastern Kingdoms on Azeroth.

Rylaks are tamable by hunters as part of the chimaera family. They were originally added in patch 6.0.2 as their own unique pet family but were merged with chimaeras in patch 8.0.1.