From Wowpedia
(Redirected from SSC)
Jump to: navigation, search

Serpentshrine Cavern is the raid wing of Coilfang Reservoir, where Lady Vashj has made her lair. It is a 25-man raid instance with six bosses, culminating with Lady Vashj herself.

These are the words of Lord Illidan Stormrage to his most trusted lieutenant, Lady Vashj. Shortly after the Third War, when Illidan requested the aid of the naga, a group of naga led by Lady Vashj answered his call. Ever since, Vashj has displayed a fierce dedication to Illidan.

Now the naga witch carefully monitors Coilfang's operations from her seat of power within Serpentshrine Cavern. Far more at home here among the waters of the reservoir than locked within the cold stone walls of Black Temple, Vashj maintains a close eye on her minions and personally oversees the draining of Zangarmarsh.

Whether her loyalties belong to Illidan alone, however, remains to be seen.[1]

There is no required boss order in this zone, as there are several paths from the zone-in to Lady Vashj. The main 'cavern' is composed of a collection of large bridges and platforms above water. By using waterwalking you can start pretty much anywhere. 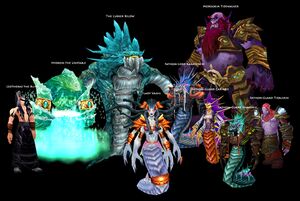 Tokens for Tier 5 gloves, legs, and helms drop in the Serpentshrine Cavern. 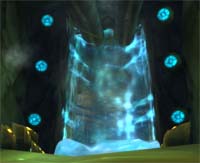