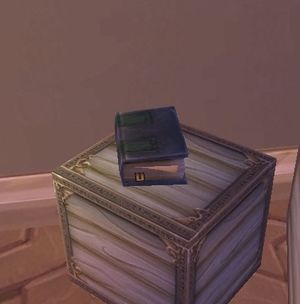 <The worn journal's entries are separated by illegible or missing sheets.>

What would Nikolai think? I wouldn't dream of telling him about the voice, but I can barely speak around him anyway. Perhaps the voice is my conscience...

... It's not so much an echo as it is a comforting voice in my head, peassuring[sic] me that there's more to come. It feels like the opposite of a headache (if that makes any sense), a wave of warmth and ideas. For example: I knew the librarian kept some materials secret, but the voice tells me that even so, her understanding of demons is laughable at best.

My conscience was right again. I am more than adept at the simple spellwork they teach us at school. For every mana biscuit my peers conjour, I can make a meal. Nikolai can see the change within me. Is he scared? My conscience tells me that's what the elder mages call respect.

I could seek him out... he's surely in the north! I can see the way clearly. Redemption can't be impossible. It can't be too late. I can make him whole again, or better! With my powers growing, amplified, I can make us all so happy! Mother, Father, Nikolai... we can all be one, together...

Nikolai fears me; his eyes betray what his lips won't say. It's fine; our history and my conscience agree that respect and fear are the same. If he leaves me, I'll make sure that whoever dares to touch what's mine lives to regret it. They'll all be ours in the end, my sisters.

... With threats to report or expel me if I don't return his cat to normal. What's abnormal about an old cat? I would have liked to do it to him instead. How dare they defend him when he stood up to me in front of Nikolai?

Mother had the nerve to scold me. Doesn't she realize who I am? I can feel him calling to me. This city and these people don't deserve me. More than enough of the provisions I'd need are in the kitchen. Nikolai, Mother, even that blasted cat... they'll do anything I want and stay with me forever. The money in Mother's dresser is mine by right; I can only help him.

<The rest of the pages are empty.>