Sabellian, also known as Baron Sablemane, is a black dragon, son of the black Dragon Aspect, Deathwing.[4] He was described as his lieutenant in all things prior to the black Aspect's abandonment of Draenor.[5]

During the black dragonflight's alliance with Ner'zhul's Horde, Sabellian and his brethren transported the orc chieftains Fenris Wolfbrother, Tagar Spinebreaker, and a small party of orcs to Menethil Harbor, on their way to retrieve the Jeweled Scepter of Sargeras. Once the artifacts were secured he followed Deathwing to the orcs' homeworld of Draenor.

Once on Draenor, the black dragons settled into Gorgrond and Frostfire Ridge. They were not there long before they were attacked by Gruul, his offspring, and a small group of Alliance Expedition fighters. The eggs were destroyed and Deathwing was forced to flee from battle, followed immediately by Sabellian.[6]

Deathwing managed to return to Azeroth, but Sabellian remained behind on Draenor — now Outland. He is a fierce enemy of Gruul the Dragonkiller and Gruul's seven sons, and hates them deeply for killing Sabellian's own people and children.

Sabellian has admitted that he counts Rexxar as one of his friends, though he has not revealed to Rexxar that he is a black dragon.

He communicates regularly with Samia Inkling through Baron Sablemane's Blackwhelp.

Sabellian wears the guise of Baron Sablemane. He is a quest giver located outside the Circle of Blood in the Blade's Edge Mountains -- the land that was created as a merger of Frostfire Ridge and Gorgrond. He assists adventurers in killing two of Gruul's sons: Gorgrom the Dragon-Eater and Goc, reverting to his true dragon form and personally fighting the latter.

Currently he and the black dragons under him remain in Outland; Wrathion is unaware of their continued existence.[7] 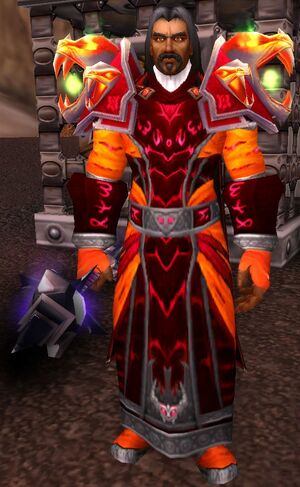 My loathing of interruptions is overshadowed only by my hatred of Gruul the Dragonkiller and his seven sons!

Sabellian is noticeably much less hostile than other black dragons towards non-black dragonkin, as seen how he treats the player and Rexxar (while somewhat rude, he isn't openly hostile and shows no intent to actually attack). It is possible that due to his extended period away from Azeroth (and the Old Gods) that he no longer hears the maddening whispers that plague the rest of his corrupted flight. However, Fahrad too did not show any sign of old god influence, until Wrathion forced them onto him by angering the old gods.

While the lineage pictures from Thrall: Twilight of the Aspects and The Magazine #2 list him as the son of Deathwing and Sintharia, Ultimate Visual Guide refers to him as the half-brother of Onyxia and Nefarian. It can be speculated that Sintharia is not Sabellian's mother, but it is said that only Sintharia could survive mating with Deathwing. Moreover, comparing the other lineages it does not seem to be true as in case of Malygos's child, Balacgos, the mother is clearly listed as unknown. It could be possible that he was born before Deathwing succumbed to the whispers of the Old Gods.