The vicious saberon are a cat-like species native to Draenor.

Few creatures embody the savagery of Draenor as much as the saberon, vaguely feline beasts who have adapted to nearly all of this world’s diverse environments. From the icy caverns of Frostfire to the steamy jungles of Tanaan to the maze-like rocky outcroppings of Nagrand, there’s not a niche that the ferocious saberon haven’t conquered. Saberon outwardly appear more advanced than beasts; they have a social structure and can shape simple tools into weapons. Adventurers should be especially wary of saberon hunting parties, whose coordinated attacks, sharp rending claws, and ability to shadowstep behind prey make them deadly indeed.[2]

After the Mag'har of the alternate Draenor arrived on the main universe Azeroth, saberon could be seen running off toward the Northern Barrens.[3]

Saberon are cat-like humanoids, standing around 6-7 feet tall.[citation needed]  Their ranks include hunters and warriors, as well as witchdoctors and "shadowshapers", both wielders of magic. The saberon have highly developed rituals and customs.[4]

Melee types usually wear minimal clothing, often a simple loincloth, and may fight barehanded or with dual-wielded knife-like weapons. In contrast, the magical types are lavishly decorated with complex garments, ornamentation, and feathers, and wield large and lengthy jawbones as weapons. These saberon are adorned with necklaces, belts, shoulders, bracers, and headdresses, and wear wrap-like garments covering their lower bodies.

The difference between the appearance of the two groups is likely due to the higher position or rank of the magic-wielding types within saberon culture but may also relate to religious or ritual purposes.

They cook and eat other humanoids such as orcs.[5]

This section contains information that needs to be cleaned up. Reason: beta-only need to be moved to one section / column 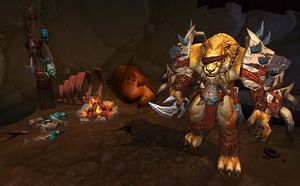 A saberon in its lair.

This species vanished or was completely annihilated when Draenor of the main universe was shattered into Outland.