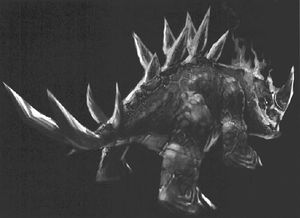 There is more than one type of creature called a salamander[1] or fire salamander[2] on Azeroth.

[Cape of the Fire Salamander] and

Salamanders are subterranean beasts that share a common ancestry with the mighty kodo beasts. However, they have adapted to life beneath the earth by evolving a number of natural defenses and abilities.[3]

The salamander is a monstrous reptilian quadruped with a fiery breath weapon, reaching about 40 feet long and weighing close to 4,000 pounds. Salamanders are found nearly exclusively underground, where they make their lairs in vast caverns littered with the charred remains of their victims. They are omnivorous, and while they will graze on mosses native to their caverns, they will also happily eat anything they catch. They are only encountered in pairs during the mating season, when, if anything, they are even more voracious hunters.[4]

These subterranean creatures share a common ancestry with kodo beasts, yet they have adapted to life beneath the earth by evolving a number of natural defenses and abilities. They are not the gentle beasts that the kodo are; instead, they are ferocious predators, hunting anything that enters their realm. Troggs and mites worship the massive reptiles.[4]

They are also cousins to the thunder lizards.[5]

The apparent tie that salamanders have to elemental fire lends credence to the tales that there exist "kodo lizards" with supernatural powers tied to elemental storms. Some scholars claim instead that their fiery breath betrays an unholy link to the Burning Legion. Yet other tales claim that salamanders are the offspring of a kodo beast and the legendary Red dragon Alexstrasza.[4]

A salamander typically bites or claws its prey. If a salamander is beset with superior opposition, it will attempt to keep them at bay with its breath weapon. Since they are not fast enough to run down prey, salamanders will also use their breath weapon to cook fleeing prey. Such cooked prey lasts longer than fresh kills, and salamanders seem to know instinctively to save such pre-cooked meals for a time when they are hungry. When not in combat, they tend to spend their time lying still, in wait for prey.[4]

The salamander are one of the types of the elemental kin and can be found in different levels of strength in the Elemental Plane. They are found in the fire domain.[6] Noble salamanders can be summoned by druids as nature's allies.[7]

These type of salamanders are fully described in Appendix Three of Manual of Monsters, however the validity of the source is disputed.