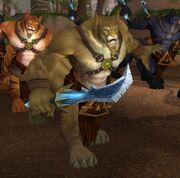 Salhet, training as hard as he can at the Ramkahen Legion Outpost.

Salhet is a tol'vir and a soldier of the Sword of Ramkahen (the Ramkahen army).

Until the player arrives, he is considered the weakest link of the Sword of Ramkahen, and is often sent by High Commander Kamses to "special missions" (training his skills on killing hyenas). He is not a very good archer and also can't connect with his sword, missing most of his targets.

After his failure in killing the hyenas, he tells the player that ever since he was a cub he wanted to be a general and was eager to join the army, but as you've seen he lacks the coordination and skill a combat soldier needs. However, he is sent so often to kill hyenas that he befriended some lions and trained them to do his bidding. He reveals a gifted tactical mind as he commands his lions to effectively slay legions of hyenas.

After the player informs Kamses of his talent, Salhet is given a regiment to command, and he is sent with his regiment to protect Nahom from the Neferset.

After assisting Salhet and his regiment succeed in protecting Nahom, you both proceed to assist in the the fall of Neferset City.