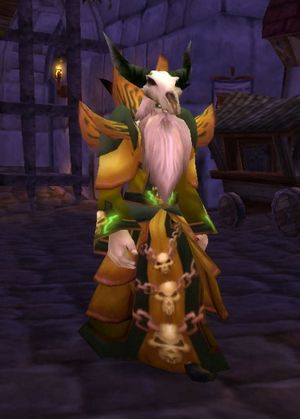 Salramm the Fleshcrafter is a necromancer and the second boss of Culling of Stratholme, an instance introduced in Wrath of the Lich King.

In Warcraft III: Reforged, he was added into The Culling, hiding within one of Stratholme's houses and ambushing Arthas's forces once the house is destroyed.

Salramm the Fleshcrafter was one of the first necromancers trained in the halls beneath Scholomance. He saw the test subjects, and occasional fellow students, as little more than a collection of interesting parts for his work. Now he has the entire population of Stratholme for his experiments... along with any interlopers who try to stop him.

Tank and spank for both normal and heroic mode, just keep healer protected since the odd zombie will spawn out of no where as well as the boss's ghouls. Ghouls should be killed ASAP as the boss explodes them at random for massive damage.

Spawn
You are too late, champion of Lordaeron. The dead shall have their day.

Aggro
Ah, the entertainment has arrived!

Death
You only advance... the master's plan...

Outro
Arthas yells: Champions, meet me at the Town Hall at once. We must take the fight to Mal'Ganis.

Go sniff somewhere else pup. You'd best crawl back to your senile father and await the end of your reign