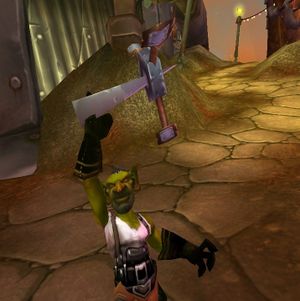 The Samophlange is a goblin-made component and a running gag in Warcraft.

This is a quest item for the quest

Sputtervalve finds that the Venture Company (presumably Tinkerer Sniggles) is experimenting with something called a Samophlange, and sends adventurers to retrieve it from its Control Console. The

[Control Console Operating Manual] says that it is used to "automatically regulate the flow of fuels, gasses, liquids, and related machinery". When retrieved, Sputtervalve breaks it, prompting additional endeavors (in Cataclysm even more so). Boss Copperplug seems to have invented it. Every goblin seems to be impressed with it at various stages, despite not quite knowing what it does.

The Samophlange, or rather, an upgraded

[Induction Samophlange] (which is very different to a trained eye), makes an appearance during the Twilight Highland's prequests in Bilgewater Port held by Smoot, who built it. It has become an object of reverence. Later in the Twilight Highlands the Samophalange falls into Alliance control and needs to be recovered again. After being recovered the Samophalange it is given to Captain Krazz.

Khadgar briefly mentions the samophlange upon turning in

[100D] Core of Iron, where he says "At least I'm beginning to understand what they [the goblins] use a "samophlange" for."

If a player successfully causes Borka the Brute to destroy three Priceless Paraphernalia in Grimrail Depot during the Rocketspark and Borka encounter, Railmaster Rocketspark will yell out Gah! That was my last samophlange! Do you know how hard those are to get?

In the canceled Warcraft Adventures, the samophlange was first mentioned by Gazlowe when Thrall almost stepped on it. It was apparently very delicate. In Gazlowe's words, it was a revolutionary tool that was essentially a high powered drill designed to attach the snabgasket to the bleemseal's intake valves (both were zeppelin components). It attached to a hose of some kind.