For the priest talent, see

“The San'layn are the Lich King's immortal soldiers!”

The San'layn (sometimes spelled in lowercase, also known as the Darkfallen)[1][2][3] are vampyr blood elves in service to the Scourge.[4] They used to be among Kael'thas Sunstrider's greatest followers,[5] until they were raised into undeath by Arthas following Illidan Stormrage's failed assault on the Frozen Throne.[6][7] During Battle for Azeroth, a number of San'layn led by Blood Prince Dreven were given a chance to join the Horde by Warchief Sylvanas if they could work with them, but Dreven was killed during his mission.[8]

Blood elves being killed during Arthas' return to Northrend.

In the aftermath of the Third War, the blood elves were cut off from their source of magic, the Sunwell. Desperate for aid, their prince Kael'thas Sunstrider pledged allegiance to Illidan Stormrage who taught them how to siphon magic, and how to wield fel.[9] The blood elves, or Sunfury, seeking to avenge their fallen brethren, participated in Illidan's attempt to destroy the Lich King.[10] Arthas intervened, and the two armies clashed, but the undead ultimately defeated Illidan's forces at the foot of Icecrown.[10][11] The surviving blood elves returned to Outland along with Kael'thas.

A few remained lost and scattered in the frozen wastes of Northrend, but Arthas sought out one by one those who had challenged the Lich King. He shattered their forces and raised the most powerful ones into the Lich King' service as San'layn.[7] Among those survivors was Lana'thel, wielder of the draconic blade Quel'Delar, who was no match for the power of Frostmourne. She was chosen by the Lich King to serve him in undeath as the queen of the San'layn.[12] 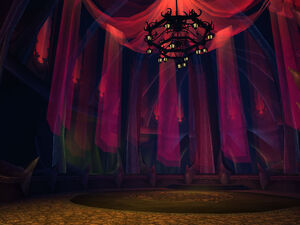 The Crimson Hall in Icecrown Citadel.

The San'layn oversaw the Scourge's operations throughout Azeroth.[13], holding an important position amongst the Scourge offensive,[14] with its members, most of the times, performing important tasks on the behalf of the Lich King.[15][16] They were often found in strongholds of other Scourge-affiliated races alongside with its local leadership, or in command of Scourge bases or operations across Northrend, acting as agents, leaders, or ambassadors.[17]

During the Scourge's second invasion, the San'layn Prince Tenris Mirkblood had infiltrated Karazhan by orders from the Lich King, in a mission to learn about the strenghts of their enemies. The operation was thwarted by experienced heroes sent by the Argent Dawn.[18]

They took part in the assault upon the Scarlet Enclave, were responsible for the resurrection of Archmage Arugal, the creation of the massive flesh titan Thrym, challenged heroes in battle at Valhalas, and acted as ambassadors to the vrykul of the Howling Fjord and as agents of the Scourge forces attempting to conquer Azjol-Nerub. The San'layn maintained an especially strong presence in the Borean Tundra, leading the assaults from Temple City of En'kilah and the necropolis Naxxanar floating above the fortress.

They faced heavy resistance from the Alliance and the Horde. With most of their blood princes slain by the end of the Northrend campaign, the Ashen Verdict and a group of heroes raided the Crimson Hall within Icecrown Citadel, their headquarters. The blood-princes Valanar, Keleseth, and Taldaram were raised into undeath by the Lich King to avenge themselves, but were killed again, along with their blood-queen.[4]

Blood-Queen Lana'thel's daughter, Blood-Princess Thal'ena, had been imprisoned in the Violet Hold by the Kirin Tor in the aftermath of the war against the Lich King. She was freed by Lord Malgath in an attempt to strike Dalaran from within, but was killed by a group of heroes. 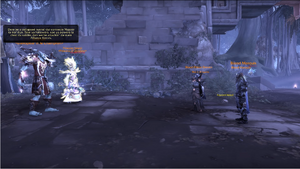 With no home left, several San'layn were employed into the Horde's ranks, although Talanji did not trust them. Sylvanas came into an agreement and gave them a chance; besides having to respect the hierarchy of authority within the Horde, if the Darkfallen could work with them they would get a home with the Horde, if not they would be gone.[19]

They were tasked to clear the rubble in a collapsed tunnel that connects Nazmir to Vol'dun. Blood Prince Dreven and his followers came into conflict with Shandris Feathermoon, eventually killing members of her party. Hunted by the Alliance, the blood prince was cornered traveling via boat. Aboard The Crimson Squall he was training other San'layn and alongside his followers were siphoning power from blood-infused crystals to bolster their unholy abilities, indicating that the San'layn were growing their ranks again. When cornered, Dreven killed and drained the Forsaken troops aboard his ship, intending to blame their deaths on the Alliance. The blood prince and his followers were ultimately slain by Shandris and an Alliance adventurer.[20]

The banner of the San'layn.

San'layn mostly retain the builds of their still-living kin. They are 5–6 feet tall with slim, athletic and strong bodies, and have fairly long hair and minimal facial hair.

However, unlike blood elves, their flesh appears necrotic and, though universally pale, ranges from fleshy pinks and red to gray and light green, and they tend to have either white, blond, red or dark hair. Their eyes have white, yellow, green, blue or black glows. Some San'layn have clawed fingers and ears more closely resembling those of a bat, and a few have developed wings.

The San'layn are cold, arrogant vampyr who inflict pain for pure entertainment.[21] Bearer of a curse which makes them hunger for blood,[22] they are often found siphoning from blood globes and crystals.

Darkfallen, most of the times, dress in red, orange and black garments, like tarnished versions of their living cousins, the blood elves. They have assimilated the Scourge shared culture, and contributed with their own, which can be seen in the decoration of the Crimson Hall, inside the Icecrown Citadel.

Their most common mount is the skeletal horse and they have been shown to keep bats, spiders and blood worms around them.

Skilled in a variety of magic schools, they often make use of vampiric skills, have even demonstrated some shape-shifting abilities and posses great mental influence over human minds, when empowered by the Lich King.[23]

During the Northrend campaign, the San'layn possessed two main bases of operations across Northrend: the Temple City of En'kilah and the Crimson Hall. The Temple City of En'kilah served as the command center of the Scourge in the Borean Tundra. The Crimson Hall was the headquarters and home of the San'layn, located inside the Icecrown Citadel, and was the place where the most powerful ones could be found. Blood-Queen Lana'thel held the leading position in the San'layn hierarchy, and the Blood Prince Council were the second in the chain of command of the faction.

Later, during the Horde War Campaign, the Darkfallen attempted to join the Horde's ranks, only to be slain alongside their leader Blood Prince Dreven by the hands of the Alliance.

The current status of their leadership and its organization is unknown. 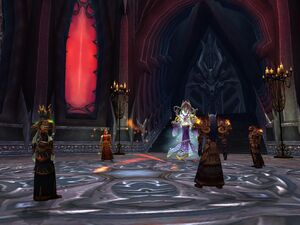 Darkfallen in the Crimson Hall. 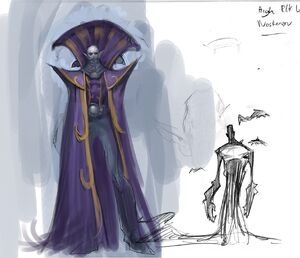 Concept art from The Art of Wrath of the Lich King.