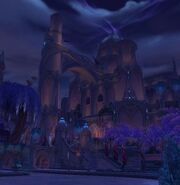 The Sanctum of Enlightenment

The sanctum is occupied by the Duskwatch, Suramar's peacekeeping force, though little is known of its exact purpose. Both the name, as well as many of the statues found outside, seem to indicate the sanctum acts as some sort of arcane library or similar repository for knowledge. It is known that much of the Duskwatch's scrying efforts are concentrated on the Terrace of Enlightenment just outside.[1]