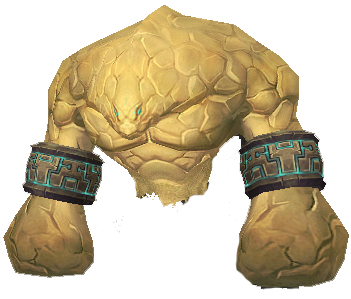 Sand elementals are a type of elemental. Born of sand, these dangerous creatures can form and disperse in the blink of an eye.[1] They are sometimes controlled by the sand trolls.

After fighting his way through Throne of Thunder all by himself, Major Payne decided to take a break and search for treasure in the deserts of Tanaris. There, he encountered a sand elemental which had followed him from the Throne to exact revenge. It first appeared as sandy whirlwind which caused the wind to kick up more than usual and Payne's hairs on his back and neck to stand up, before taking the form of an elemental.[2]

Sand elementals began to appear in Silithus after Sargeras destroyed the area. Sandstorm elementals are sand elementals found in Vol'dun that are imbued with lightning.