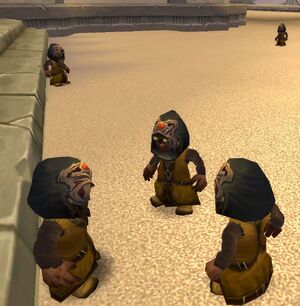 A gathering of Sand Gnomes during the Cataclysm alpha.

Sand gnomes are a strange, pallid-skinned race of tribal gnomes who live under the shifting sands of the Bone Wastes in Terokkar Forest. How they arrived in Outland is a mystery.

Chief Archaeologist Letoll, who leads a group of Explorers' League researchers in the area, is insistent that sand gnomes exist, but his colleagues are not as convinced. He apparently once made his team search Silithus for evidence of sand gnomes.[1]

7th Legion Siege Engineers will occasionally say that they used to know a dwarf that claimed gnomes evolved from beneath the earth and all started out as sand gnomes. However, the engineers themselves consider this to be nonsense.

[Fumper], a type of drum dug up by the dwarves in the Bone Wastes, normally attracts giant bone worms to the surface, but will occasionally instead cause an angry sand gnome to appear and attack the one who disturbed it. However, once this information is relayed to Dwarfowitz, he merely replies "Sand gnomes? Yea, sure... The desert can do strange things to a person".[2]