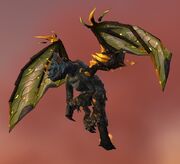 This creature can be mounted.

Sandstone Drake is an alchemy caused transformation. This is the form a player becomes when they make use of a

[Vial of the Sands]. It allows for one passenger.

Sandstone Drakes were studied in great detail long ago by the famed alchemist Walleye Sprysprocket, who later developed potions to mimic the drakes' physiology.[1]