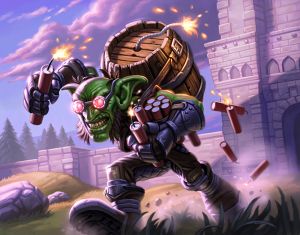 A goblin sapper in the TCG.

Sappers, saboteurs, demolitionists, grenadiers: all similar names to design the same thing, experts in the handling of explosive weapons. Originally sappers were mostly goblins and dwarves, but now many races are supporting their ground troops with these powerful technological devices. Bombardiers are another form of sappers, mixing their field experience with the skills of a tinker.[1]

Some arcane casters will be called sappers due to their abilities to drain life and magical energy out of their enemies (examples being the Hakkari Sapper and the Faceless Sapper) but these will not be described here. Drivers of demolishers are also called demolitionists even though they are not handlers of explosive weapons.

The mischievous goblin sappers were known throughout the Horde for their incredible aptitude for destruction. These diabolical goblins were invariably armed with extremely volatile explosives; which enabled them to level enemy structures and weapon emplacements. Although the sappers were highly unpredictable and insubordinate, they had became necessary to the plans of conquest maintained by the Horde.[2]

These goblins were members of the Steamwheedle Cartel.[3] They were well versed in sneaking up to a fortress and setting off their deadly charges.[4]

From the deep, subterranean halls of Khaz Modan, the dwarven demolition squads came to aid the Alliance in their crusade for the liberation of Khaz Modan. As masters in the handling and arming of explosives, these squads were renowned for their ability to demolish any obstacle - from a mighty wall to a bulwark of solid stone. Reckless and bold, these dwarves were zealous in their loyalty to the Alliance and would not hesitate to detonate their explosive payload should the situation turn grim...[5]

These teams later evolved into the dwarven mortar teams.

After the defeat of the Horde during the Second War, the goblins realized their mistake and left the Horde. They are now a neutral force, making money off every side. Explosive team of sappers could be hired at special laboratories found all over Azeroth.

After the war Gazlowe sent a team of sappers to the Orgrimmar Tunnels.

As time passes, more and more races are becoming tech-savy. This can be represented with the appearance of new sapper-style classes such as the grenadiers, soldiers specialized in the throwing of grenades and assault operations. The Iron Horde is particularly adept of such tactics and a huge amount of their troops are equipped with grenades or at least some sort of explosive device.[6]

Surprisingly, compared to their Aqir brethren, the mantid are quite adept at using technology to turn the tide of battle,[7][8] and several sappers, saboteurs and bombardiers can be found among their ranks. 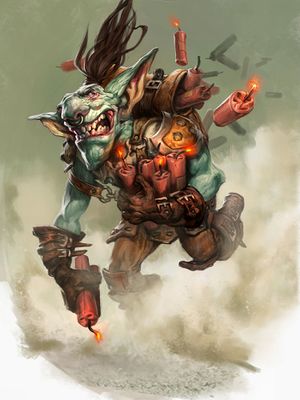 A goblin sapper in Hearthstone. 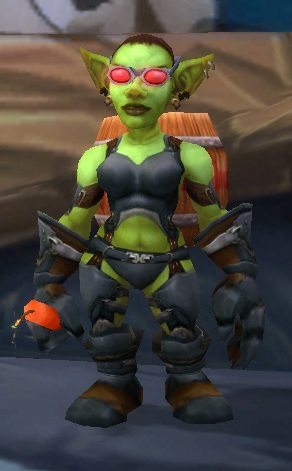 A goblin sapper at K3. 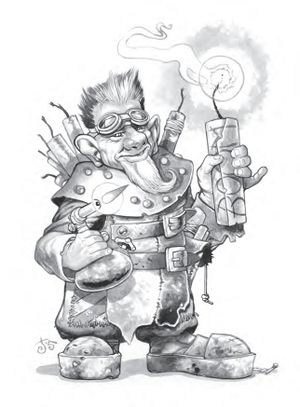 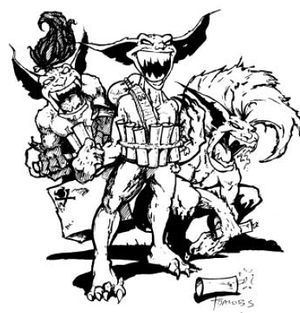 Goblin sappers from the Warcraft II: Tides of Darkness manual.

If ever a sound was associated with a particular class, it's the sapper. Quite simply, sappers love to blow things up. However, unlike many goblin tinkers, they don't necessarily like the idea of killing themselves in the process. No, to a sapper, the fiery blast of a good explosion is a form of art unto itself. Some spend a great deal of their lives trying to find new and interesting ways to generate beautiful, classy explosions. Sappers are experts in all sorts of explosive devices, from small firecrackers to powerful seaforium charges capable of blowing holes in thick castle walls. Even when they don't have a prepared explosive available, a good sapper can put one together out of whatever natural materials he can find lying around.

Goblins are likely candidates for this class, since goblins like making things go boom! Gnomes and dwarves also make able sappers, with humans following close behind. The Horde made heavy use of goblin sappers in the Second War; indeed, goblin sappers were a key aspect of the Horde's strategy. Thus, the Horde knows how effective this class can be. In an adventuring party, a sapper often takes the role of a rogue or ranged combat support. He disdains typical rogue skills such as opening locks and disarming traps - he simply destroys such obstacles. When a battle erupts, he stays behind the lines, lobbing bombs into groups of enemies or employing fire-based technological devices to pick off more determined foes.

A sapper generally takes great care to avoid harming himself; but still, he spends so much time around explosives that accidents are bound to happen. As a result, his body gradually becomes covered with a layer of tough scarring that protects against fire.

The sapper has learned new tricks to increase the yield of his explosives. Any grenade, bomb or other technological device he creates that deals explosive fire damage deals an additional damage per die.

The sapper is an expert in both the crafting and use of explosive devices. Any sort of bomb or grenade — basically anything that blows up — is his specialty.

A sapper can attempt to build small explosive devices out of whatever materials are available. Even in the midst of an untamed wilderness, he can usually locate certain plants or minerals that, when mixed together, become something flammable.

The highly skilled sapper has transformed explosives into works of art. He can deploy a perfect blast — a thing of beauty (at least to himself and his allies). He can use this ability with any explosive device — as small as a grenade all the way up to massive wall-cracking charges — but he must prepare, set and activate the device himself. Doing so takes twice as long as normal for the device in question, but if it is successfully set off, the explosive deals the maximum possible.[9]

The Goblin Sappers were known for their mischievous streak and aptitude for destruction and once the most lethal of demolitions groups known in the Horde. Even with the explosive reputation of Goblin Engineers, the Sappers were some of the first to bring Goblin explosives into wartimes and to utilize their instability successfully.

Sapper groups were first enlisted into the Horde during the Second War, despite their reluctance to obey orders and adhere to authority. They were composed of a group of three Goblins adorning bandoliers of dynamite and armed with barrels of TNT, detonators, and a vast array of other volatile explosives. The tactic of these demolition squads was pure suicide: trigger the destructive equipment while charging head-on toward the target or obstacle. Despite the mortality rate of the Sapper’s technique, their specialty in destroying enemies, buildings, and even sheer rock is barely matched by Dwarven Demolition.

With the end of the Third War and the Neutrality the Goblins have taken, the need for Sappers has come to virtually a halt. It is possible that the only remaining Goblin Sapper teams that operate are for excavation purposes and that the newer generations of Goblins have harnessed their destructive capabilities towards mastering and teaching the technique of explosives through Engineering.

A great number of sappers - primarily goblin sappers - perished during the last war, mostly as a result of their overzealous use of too many explosives at once. Those who survived have become much more focused in their art, preferring precision to risks. Generally, the older a sapper is, the more careful and cautious he is - and the more respect his associates give him.[10]

Cheerfully striding onto the battlefield is a team of odd dwarves, scarred and blackened faces, a mace in one hand, a pistol in the other, hauling kegs of powder strapped to their backs. They seem to ignore the rest of the field.

Sappers are engines of destruction; when the Alliance needs a structure removed from the battlefield, a dwarven demolition team is sent to blow it away. Sappers invite bloody death (and hearing loss) every time they go into action, but the sight of a Horde gatehouse collapsing into a pile of rubble is well worth such risks. The sapper's tactics focus on delivering large amounts of gunpowder to a target and using his skills to destroy it. They are aware of the surrounding battle only as it concerns their ability to reach their target and have enough time to set a charge and escape.[11]