Sapphronetta "Saffy" Flivvers is a gnome mineralogist who worked for the Explorer's League and was sent to study Azerite in Silithus shortly after the Argus Campaign until she was kidnapped when Horde forces attacked her camp. Before coming to Silithus, she was a consultant member at the Hall of Explorers.[1] She has fiery red hair.[3]

Sapphronetta was previously married to Grizzek Fizzwrench when she was young. They were lab partners that were stupid enough to fall in love with each other. After the first month, their relationship began to fall apart because everything one of them did seemed to irritate the other. After she divorced Grizzek, she joined the Explorer's League.[2] She claimed that the robotic parrot Feathers was hers, but in fact they made it together as a first (and last) anniversary gift to each other.[3] Her friend Kelsey Steelspark got to know Grizzek during the relationship and didn't like how he could get Saffy all wound up, but accepted them as a couple.[4]

Following the Argus Campaign, Sapphronetta was sent by Brann Bronzebeard and King Anduin Wrynn on an expedition to Silithus led by Gavvin Stoutarm, alongside three dwarves from Explorer's League and a small handful night elf Sentinels, including Sentinel Cordressa Briarbow. While the archaeologists on the team to look for Old Gods, doomsday technology, and the "usual sort of things", Saffy—a well-recognized geologist specializing in mineralogy—was brought along specifically to study Azerite.

She befriended Cordressa the night they arrived in Silithus, talking about the moons, the Blue Child and the White Lady. After they ate dinner, two Sentinels, including Cordressa, left to scout out the Horde forces in the area, while the rest of the team went to sleep.

In the middle of the night, she awoke to the sound of goblin bellowing, the crack of rifles, and the clang of steel against steel. She saw two dead Sentinels and a third body she did not inspect for fear her panic would overcome her mind. She defended herself by grabbing the pistol she hid under her pillow and pointed at a shape blocking out the horizon stars. She shot her pistol twice, missing both times, and angered the goblin Kezzig Klackwhistle. Kezzig's companion pointed out that the "gnome lady" fit a description given to all goblin forces by Trade Prince Gallywix and began grabbing her. Saffy fought back by biting Kezzig and was subsequently punched in the face and knocked out.[1]

When she awoke, she was on a wyvern heading towards Tanaris. She was reunited with her ex-husband Grizzek, whom she despised. She was against anything to do with him until Grizzek put a piece of Azerite into her palm and its effects opened her mind to the possibilities the two could do with it.[3]

As the weeks went by, Saffy and Grizzek worked on making new Azerite inventions for Gallywix, such as armor and building material. As the two worked together, they began to rekindle their relationship. Eventually, they were notified that they were now ordered to create only weapons.[2]

The couple was devastated by this news as they did not want to create things that caused harm to others. They created a plan where they would set up a bomb in their lab and secretly escape through a tunnel that opened up in a random part of Tanaris. They also programmed Feathers to fly to Teldrassil with a warning of what had happened and a plea for rescue, with the duo intending to offer their discoveries to the Alliance on the stipulation that they would only create things that could help, not harm. Prior to leaving, Grizzek proposed once more to Sapphronetta, offering her an Azerite ring, and she accepted. While traveling through the tunnel, they talked openly about their feelings for each other. When the duo exited the tunnel, however, they were captured and tied up back-to-back by Druz, Kezzig, and their goons, who had also taken their notes. Druz informed them that they knew of their plan ahead of time and had taken all their inventions, as well as disarmed Grizzek's bomb in the lab and shot Feathers out of the sky. Kezzig then placed a bomb between the gnome and goblin and left with Druz and the goons.

The newly engaged couple were able to get the bomb to fall to the ground between them, but when they attempted to flee, their short, tied up legs could only get them so far. As they continued to waddle their way to safety, Grizzek lamented that Gallywix would exploit their work to hurt others after all. Saffy, however, confessed that he wouldn't since she had already destroyed their notes, leaving Gallywix unable to recreate their experiments and with access to only a few prototypes and mixed potions. At that moment, Grizzek slipped on a stone and broke his ankle, forcing him and Saffy to crawl. However, the gnome then realized that she was still wearing the Azerite ring, which would possibly be enough to protect them from the explosion. As Grizzek was in the process of saying "I love you" to Sapphronetta, the bomb went off.[5]

The two survived the explosion and made their way to Kul Tiras. During a Horde incursion into Tiragarde Sound they could be found in hiding at Greystone Keep, and provided the Grizzek's Rocket Hop to aid an Alliance adventurer in fighting the Horde off.[6]

An adventurer would later travel to Tanaris to investigate what happened to Sapphronetta and Grizzek. After repairing Feathers and following him, the adventurer found Saffy and Grizzek just north of Thistleshrub Valley.[7] Knowing that if the adventurer found them that meant others could, Saffy and Grizzek promised to give the hero Feathers in exchange for not telling anyone they were still alive. The only exception she made was for Kelsey Steelspark, who was the only person Saffy felt safe about knowing. With that, the pair drove off on Grizzek's bike.[8]

Later, the adventurer enlists Sapphronetta's aid in the mission to Mechagon. She agrees, so long as Grizzek - who is living with her in Boralus - is allowed to come as well.[9] Later, if Sapphronetta is spoken to in Rustbolt on the subject of goblin technology, she flashes the Azerite engagement ring that Grizzek gave her in Tanaris. Grizzek covers himself from head to toe to hide his goblin identity from the gnomes on their expedition team, though once they and the goblin team led by Gazlowe are welcomed to Rustbolt by Prince Erazmin, he was apparently comfortable enough to not wear the disguise. After Sapphronetta expressed a desire for an Azeroth Mini of her own, Grizzek created the blueprints and comissioned the adventurer to make one.[10] 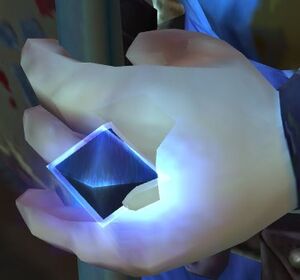 What a wonderful workshop!

We've got everything we need to discover something amazing here. Good things coming to Rustbolt!

Aren't you uncomfortable working with so many goblins?

No, I don't mind at all. Most of my favorite things were made by a goblin.

<Sapphronetta shows you the massive Azerite ring on her finger.>

[120] Ideas Can Come from Anywhere

Given that she was married to Grizzek, she may have been considered a part of the Bilgewater Cartel.