Saragosa is a great blue dragon who circles high above the Nexus. She serves both as guardian and prime consort[2] to Malygos. If any serious threats arise, she alerts her master of the danger. Saragosa meets her death in

Saragosa has served as Malygos's mate for at least ten thousand years. She survived Deathwing's betrayal, but her mate's madness caused them to abandon her clutch. Korialstrasz found this particular clutch of eggs, which would include Arygos and Kirygosa and safeguarded them so that the blue flight would not die out. 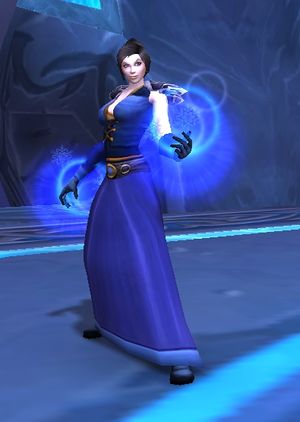 Saragosa in her human form.
Retrieved from "https://wow.gamepedia.com/index.php?title=Saragosa&oldid=5589352"
Categories: