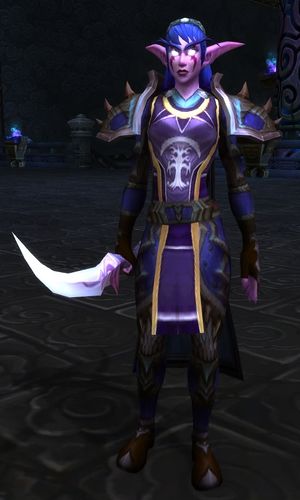 Sarannha Skyglaive is a commander of the night elf forces in Pandaria. Her sentinels play a vital role in the Alliance's acquisition of the Divine Bell.

Her team could first be seen at Mogujia, guarding the Explorer's League as they excavate the Horde-occupied mogu ruins. She ordered the deaths of blood elves at the ruins. She then moved to the Shrine of Seven Stars where the Alliance leaders spoke about the pros and cons of the sha power. After the Divine Bell was discovered within the Ruins of Korune, Skyglaive personally entered the ruins and defeated the mogu guardians within. When the Horde arrived not long after to take the bell, Skyglaive's team held the ruins until the bell was safely transferred to Darnassus. Skyglaive died combating the leader of the Horde assault, Ishi.

You should have heard the crazy stories - sha possessing our strongest troops? Simply tales to scare children.
The sha are nothing that I and my sisters cannot handle.

There can only be one reason why they're excavating these mogu artifacts, and it's not for knowledge.
They're looking for clues to the mogu's power.