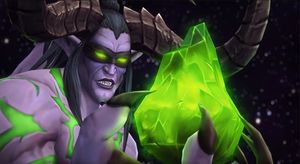 Illidan Stormrage with the Sargerite Keystone on Kil'jaeden's Legion ship above Argus before opening the rift back to Azeroth.

The Sargerite Keystone (also referred to as Sargeras' keystone)[1] is a fel-corrupted titan device imbued with the power of Sargeras himself, who created the device.[2] It allows one to travel to any world. Sargeras gave it to the ruler of Mardum, Brood Queen Tyranna, with the task of safekeeping it.

During the war in Outland, the Illidari demon hunters were sent by Illidan Stormrage to retrieve the keystone for their master. They were successful in retrieving it after killing Tyranna, and they used the keystone itself to return from Mardum to Outland. However, they were subsequently captured by the wardens led by Maiev Shadowsong as they returned from their mission. The Sargerite Keystone, now in possession of the Wardens, was then held in the Vault of the Betrayer, where the corpse of Illidan Stormrage was stored.[3]

Years later, during the third invasion of the Burning Legion, the wardens freed the Illidari and the two groups worked together to retrieve the keystone from the felsworn Cordana Felsong who had stolen it for the Burning Legion. It was brought to the Fel Hammer, the order hall of the Illidari.[4][5]

Some time later, when the Armies of Legionfall invaded the Tomb of Sargeras, the Legion ship used by Kil'jaeden began to crash toward Argus after the demon lord was killed. Illidan used the Sargerite Keystone to open a rift between Argus and Azeroth, allowing Archmage Khadgar to teleport everyone safely back to the surface, in Azsuna. The immense rift that was opened between the two planets allowed Argus to become visible in the skies of Azeroth.

As a quest item