For the sect of Satyr with the same name, see Sargeron (Outland).

Sargeron was once a night elven city, but has lain in ruins since the War of the Ancients.[74, 28]

The town's original name has been lost to time, but its ruins are now home to numerous Hatefury satyr who have redubbed it Sargeron — after their demonic master Sargeras.

The ruins were home to many holy sites of Elune, including Elune's Cathedral, Elune's Temple and Elune's Sanctuary. Several relics can still be found there, namely Elune's Brazier, Elune's Handmaiden, the Cup of Elune and the Ancient Vortex Runestone.[1] 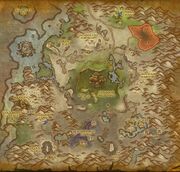 In Cataclysm, the Sargeron ruins are a night elf archaeology dig site.

"These night elf ruins have been taken over by satyrs. Their purpose here remains a mystery, though I speculate it relates to the satyrs' affiliation with the Burning Legion."[2]

Some speculate that Sargeron was once the temple of Lathar'Lazal. However, Sargeron is located much farther south than where Lathar'Lazal was located on a map in World of Warcraft: Chronicle Volume 1.