Sartharion is a black dragon boss located in the Obsidian Sanctum of the Chamber of Aspects. He is charged to watch over the twilight eggs in the sanctum.

This part of the Obsidian Sanctum contains 4 mobs of interest. These mobs are Sartharion (the raid boss himself) and 3 drakes, Vesperon, Shadron, and Tenebron. Each has their own form of adds depending on how you engage them. The drake mobs are known as "Disciple of..." respectively.

Each drake can be taken down without engaging Sartharion. The achievements require leaving one, two, or all three of them up. If you kill them before engaging the primary boss, they each give

[Justice Points] but no other loot.

Each drake fight is a typical tank and spank, but after 15-20s the drake will open a portal. One healer, one off tank, and all dps need to take the portal, leaving only the main tank and his healer behind. Much like phased content, you'll be in the same place (totems still exist where you left them), but instead of seeing the drake, you'll fight a disciple of whichever drake it is. They have a shadow aura that reduces damage taken by 25%, but periodically pulses shadow damage to you.

Vesperon's disciple will place Twilight Torment on the raid frequently, which increases fire and shadow damage taken by 75% and causes you to deal damage to yourself on hit. It used to be possible to temporarily remove the Twilight Torment debuff with any damage other than autoattacking, but the ability was changed with patch 3.0.8 and this is not possible anymore. This disciple can be ignored if fighting Vesperon alone, but is extremely dangerous in a multi-drake Sartharion fight.

Shadron's disciple will place Gift of Twilight on Shadron which increases all Shadow damage done by 50% and provides complete immunity to damage. If fighting Sartharion with Shadron alive, the disciple will use a different version of Gift of Twilight and buff Sartharion instead, increasing Fire damage done by 50% and provides complete immunity to damage. This can and will buff Sartharion's Flame Breath to levels that will one-shot your tank if left unmitigated in combination with Power of Shadron, Twilight Torment, and so on. Shadron alone with this buff is not terribly threatening, although his Shadow Fissures can one-shot low HP targets while Gift of Twilight is active.

Tenebron is similar to the first two drakes, except that in the alternate realm, instead of a disciple, you will encounter several eggs. The portal group will need to kill as many eggs as possible before reaching a time limit, at which point the eggs hatch, and everyone is reverted to the real world. Any unkilled eggs spawn whelps, which must be tanked and killed as quickly as possible, so that the DPS can return to the drake before the next portal appears. Each of the whelps can apply a stacking Fade Armor debuff, reducing armor by about 1200.

Most groups will find it is easier to ignore Tenebron's portals and tank/AOE his whelps down, as the dps loss from taking the portal will typically compensate for the higher health of the whelps as compared to their eggs.

When attempting 2 drakes and up, make sure that after killing Tenebron and before taking on the next drake that all whelp add's are killed, as whelps can cross realms between the playing field and the void zone, and can cause a wipe if the tank goes through the portal before all whelps are dead, as they will rampage and go after healers and DPS that AoE them.

Cleave - Inflicts 35% weapon damage to an enemy and its nearest allies, affecting up to 10 targets.

Will cast Pyrobuffet at anyone outside the area of his platform, rapidly killing them. Brief dips in the lava will generally not trigger Pyrobuffet.

Sartharion has a 15-minute enrage timer, at which time he will spam Pyrobuffets regardless of location.

His immediate area is surrounded by a small moat of lava. The north (right) / south (left) sides of this lava spawn lava waves by Sartharion during his emotes every 30 seconds. See layout/positioning images below for details. Everyone must stay in the layout to prevent the Pyrobuffet.

Despite his cleave being rather weak, it can still deal a lot of damage to cloth and leather wearers so it is generally best for players to treat the cleave as deadly as the raid will be taking AOE damage from adds and other effects during the encounter, this will reduce the amount of healing stress on your healers greatly.

NOTE: North is to the right in the illustrations and west is up. 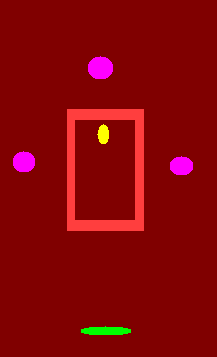 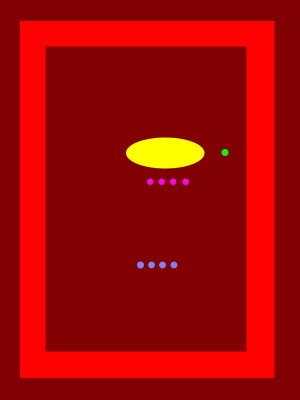 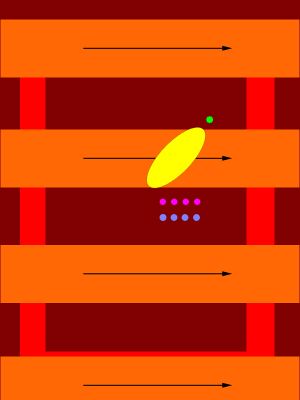 Positioning for wave originating from the left. 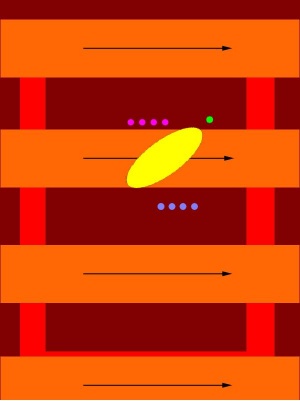 Alt. left position for melee to keep dpsing. By going through Sartharion, just in front the rear legs. 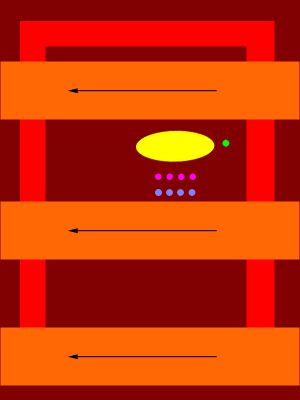 Positioning for wave originating from the right. 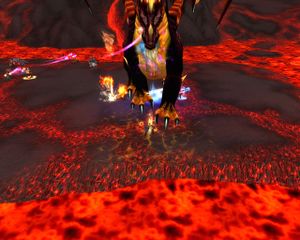 Correct Spot for tanking. Note the lava pattern on the floor below the tank, use that for positioning.

At certain intervals, a raid warning will appear saying, "The lava surrounding Sartharion churns!" Lava waves will then spawn that originate from the left or right of the encounter area. These waves place a DoT on any players caught in them, so players should move to the gaps between them. The location of the gaps is predictable depending on the side that the waves originate from, as shown in the illustrations. They are huge, obvious, and slow-moving, however, so players should have no trouble watching for them and moving out of their way.

It is possible to heal the tank through the lava waves and resulting DoT, if your group desires so.

These adds are summoned every ?s in groups of 2-4 to be offtanked. If these adds are hit by the lava waves they will enrage to deal 400% more damage, so ~800 becomes 4k, modified by Shadron's aura. Adds should be moved out of the path of the Lava Strikes. DPS will have to drop these as priority after they spawn and are picked up by the OT. The offtank must be careful using area of effect taunts when gathering the adds because Sartharion is not immune to taunt. Rogues can use Fan of Knives with Anesthetic Poison and Hunters can use Tranquilizing Shot to dispel the enrage from the adds, greatly reducing both the damage they inflict and the DPS needed to eliminate them.

The major drake of issue is Shadron since everything in the encounter is fire damage. Vesperon is less an issue as your raid is better geared. First time groups should take down all 3 drakes, making the encounter a tank and spank, minor add control, and minor movement to avoid waves. Subsequent visits may provide the chance to try while leaving Tenebron/Vesperon up.

At 10% he goes into a sort of soft enrage, summoning what looks like 5-10 of the elemental adds.

Lava elemental add's do not cross over into void zones when you go into them, but whelps do.

When clearing the instance with the intention of leaving one, two, or all three drakes alive all trash must still be cleared before engaging Sartharion. It is possible to clear trash without grabbing aggro from the drakes simply by moving along the wall far behind them. All trash and the drakes are linked with Sartharion.

When engaging Sartharion with drakes left alive, they will join in the fight as if you were encountering normally: they will melee whoever is tanking them, cast the Kael'thas-like Flamestrike, and create portals for adds. Needless to say, the fight takes a huge jump in difficulty as not only do you have to pay attention to the elemental adds and waves around the area, but now you have to simultaneously deal with drakes and clearing their adds. The drakes, upon engaging Sartharion, can and should all be killed first. At the start of the fight, they will hover overhead and apply their respective aura then come down at their respective times and start attacking and summoning portals.

The offtank should remember that the drakes do a frontal cone shadow breath and to keep them faced away from the raid, preferably parallel with how the main tank is turning Sartharion to make avoiding waves easier. If there's a good supply of rogues and hunters, misdirects can be used to bring fire adds over towards the offtank to give ample time for taunts and aggro upkeep. If this is too much trouble, a third offtank should handle the fire adds and pile them near the drake so AoE can be at its most effective.

A subgroup of a healer and DPS (the less needed to eliminate a disciple or eggs, the better) should focus on going into the portals and taking care of the adds drakes spawn. At a certain level of gear, almost anyone is able to tank a disciple but will take amplified shadow damage from Tenebron's aura.

It is highly recommended that every raider is Tier 7 / Heroic geared before trying Sartharion with any drakes up as the urgency of killing adds will require a high DPS output.

Zerg Strategy with Drakes up

Typically on 10, 8 dps, a tank and a healer are used. The drakes do however, enrage once Sartharion gets to low health, so an offtank, or class capable of kiting may try to move Tenebron away from Sartharion, as the damage may be too much for the tank to handle. Tenebron is the first drake to come down. When Sartharion reaches 25% health, Tenebron will start hitting for 25 K shadow damage. Healing and tanking cooldowns should be used starting at this 25% health mark. The ability to resist Tenebron's shadow attacks is unknown. With the normal 130 shadow resist aura, the roughly 32 K shadow attack was partially resisted, but always to the exact same number around 25 K. Resist all potions and/or flasks made no difference to the resisted amount, or the net amount of damage.

Using this strategy, you must kill Sartharion before Shadron summons his portal, as shortly thereafter he will become immune to all damage. This occurs at roughly 85 seconds after Sartharion is engaged, so you will need a minimum of 30k DPS on 10-man and 91k DPS on 25-man to kill him before this point. Obviously cooldown usage (including Bloodlust/Heroism/Time Warp/Ancient Hysteria) is recommended.

Kill all the trash mobs in the instance, but don't engage the bosses on the sides. Walk along the edge of the path, as far as possible from the bosses to not aggro them.

After making a trip around the area, get to Sartharion's platform. Pop all cooldowns on the pull and blow the dragon up. The absolute minimum DPS requirement is 58K DPS in 25-player mode, as Shadron opens his portal roughly 85 seconds into the fight (4.8M health in 85 seconds is 58KDPS).

At 100, don't even bother with the trash, just run straight to Sartharion and kill him. He should die before the trash gets to the center platform.

The amount of loot rewarded is modified by the number of drakes taken alive into the Sartharion fight. As with most Wrath of the Lich King-tier raids, loot is not shared between 10- and 25-player mode kills. All kills will award one

Aggro
It is my charge to watch over these eggs. I will see you burn before any harm comes to them!

Lava Walls
All will be reduced to ash!
The lava surrounding Sartharion churns!

Calling Tenebron
Sartharion yells: Tenebron! The eggs are yours to protect as well!
Tenebron yells: It is amusing to watch you struggle. Very well, witness how it is done!

Calling Shadron
Sartharion yells: Shadron! Come to me, all is at risk!
Shadron yells: I will take pity on you, Sartharion, just this once.

Calling Vesperon
Sartharion yells: Vesperon, the clutch is in danger! Assist me!
Vesperon yells: Father was right about you, Sartharion. You ARE a weakling.

Death
Such is the price... of failure...