Sassy Hardwrench is a level 5 goblin quest giver at the KTC Headquarters in Bilgewater Port, then later on the Lost Isles. Sassy herself is an important quest giver throughout the Goblin starting zone experience, providing many quests throughout Kezan and the Lost Isles. As such, she plays an important role in the story throughout the zone in supporting her boss/former boss ((the player character)) as he/she works to rescue the Goblins from the Isles. She first appears as "Your Executive Assistant" whilst on Kezan, a title which changes to "Your Former Executive Assistant" whilst exploring the Lost Isles.

After the goblin starting quests are finished, she subsequently appears at Hardwrench Hideaway in Cape of Stranglethorn. 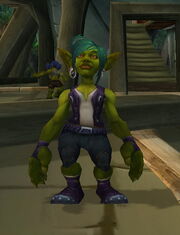 Sassy Hardwrench on the Lost Isles.

Kezan
Hey there, boss. I trust that you're enjoying your new promotion?
We all think that you're the one who's going to finally be able to replace that stinky ol' Gallywix and take the title of Trade <Prince/Princess>. But you didn't hear that from me!
We have a lot to do and very little time. Hope you're ready!

[3] Give Sassy the News
It's your big coming out party. We'll make you a Trade <Prince/Princess> yet, <name>!
Get out there and strut your stuff!

Marooned! Blasted to bits by the Alliance and stranded on some island in the middle of who-knows-where?!

Looking to get away from the hustle and bustle of city life? You've come to the right place!

Want to witness the marvels of Azeroth's famous jungle firsthand? Look no further!

Shopping for some freshly pumped bio-fuel or weapons-grade mineral ores? Then you've come to the right place, <class>!