Sauranok the Mystic is an orc quest giver located at the Warsong Hold in the Borean Tundra, and Grommash Hold in Orgrimmar.

Sauranok the Mystic, now wearing a set similar to the Tier 5 set for shaman, stands in Grommash Hold alongside Garrosh Hellscream. During a short breadcrumb quest which leads to the Twilight Highlands, it is revealed that he is a traitor to the Horde, as he has foreseen the destruction of the world and has given up on the hope of victory. Those who complete the quest to kill him will no longer see him in Grommash Hold.

Garrosh concludes that perhaps Sauranok's "visions" had made him an easy target for the Twilight Hammer cult, who had probably corrupted him from afar. 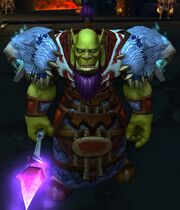