The saurok are a race of lizard-men, created by the mogu from the fauna of the Vale of Eternal Blossoms, choosing several particularly sturdy varieties of local reptiles,[2][3] designed to be smart enough to use weapons and fight for the mogu, but over the years some escaped. They are found across Pandaria, in dungeons[4] and in the open. They also attacked The Wandering Isle from the sea, led by Vordraka, the Deep Sea Nightmare.

The saurok were likely created in the Saurok Creation Pit during the reign of Lei Shen, as the Throne of Thunder was abandoned afterwards.

In the search for shock troops to consolidate their hold over ancient Pandaria, the mogu turned to an unlikely source: the fauna of the Vale of Eternal Blossoms. The mogu chose several particularly sturdy varieties of local reptiles, and twisted them in body and mind, imbuing them with an upright gait and sufficient intelligence to wield weapons[2] A saurok culture of superiority and hatred for weakness developed, fueled by the ego of the mogu masters. Soon, saurok guards began to plunder the very people they were supposed to police. They grew disobedient, turning on their own mogu commanders whenever they were displeased with the spoils of war.

Emperor Dojan responded in the traditional mogu way: the souls were ripped from every living saurok in the Vale of Eternal Blossoms, and he demanded the same fate for the legions still in the field. So began the great Purge.[5] Defiant to the last, the saurok stood their ground against the mogu in the swamp of Krasarang. It was here they had a fighting chance, drawing the imperial forces deeper in to unfamiliar territory. The mogu death toll began to climb as the rebels poisoned water supplies and sabotaged structures. In his fury, the Emperor Dojan continued to send troops, slaves, and weapons to Krasarang in an effort to eradicate what remained of the saurok. They were never successful.[6] Emperor Dojan II's maniacal drive to finish his father's work and complete the Great Purge against the rebellious saurok legions drove him to leave his court in disarray while he set out on a doomed military campaign. From his perch high on the cliffs overlooking the Krasarang Wilds he oversaw the slow clear-cutting of the jungle, the establishment of Dojanni Dungeons, and the gradual genocide of the saurok race. What he didn't expect was for the remains of the saurok fifth and seventh legions to scale the enormity of the cliffs in the dead of night, ambushing his imperial pavilion from the Valley of the Four Winds and forcing him over the edge. His body was never found. And the resulting disarray in the capitol left the empire in chaos for over two years while the saurok melted back into the wilds and disappeared.[7] 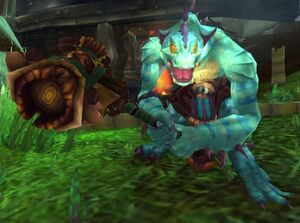 After the mogu withdrew from the Pandaren empire, their creations, the Saurok, survived by scrounging and hiding in the wild places of Pandaria. As lone bandits possessed of brute strength and innate aggression, the Saurok can be dangerous enough – but they have slowly begun to organize in roving warbands. Unburdened by "civilized" notions of property, these raiders charge into battle, seeking the spoils of softer races.[2] The ruthless saurok now roam Pandaria, stealing what they can and harassing the island's other inhabitants. The Glintrok can be found on a daring mission to plunder Mogu'shan Palace. The most infamous of these reptilian pillagers are Chief Salyis and his warband.[8] Vordraka, the Deep Sea Nightmare leads the saurok attacking both the Alliance and Horde encampments upon the Wandering Isle. Aysa Cloudsinger faces off against him within the wreckage, aided by players.

The Skumblade tribe are led by the Skumblade Saur-Priests, who promote the idea that the saurok were not created by the mogu, but instead were created by Kros, the invisible devilsaur in the sky. Kroshik is held to be a gift from Kros and and a glimpse at the Skumblade's future. 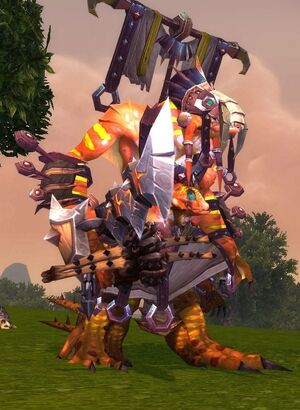 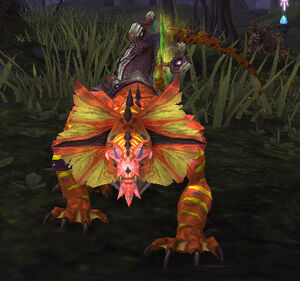 A player transformed into a saurok.

The buff Skin of the Saurok comes from doing the quest

[90] Skin of the Saurok. You only need to complete this quest once to start getting the buff; it will be applied on each subsequent return to Ihgaluk Crag. The buff transforms you into a Saurok that runs quickly on all fours, travels very far when jumping, takes no fall damage and is friendly to all Saurok unless in combat.

If you have a combat pet with you, it will also get this buff, and randomly transform into of one of the following creatures: 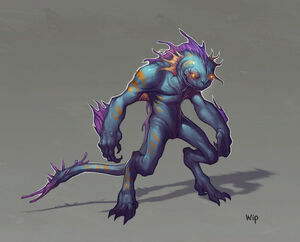 Concept art for a "salamander".

The Hearthstone expansion Journey to Un'Goro features a group of saurok living in the humid swamps of Un'Goro Crater. While saurok are not previously known to exist in Un'Goro, Hearthstone Game Designer Dean Ayala has stated that with the saurok's mogu creators having been created by the titans and with Un'Goro being such a heavily titan-influenced location, it's not so unrealistic that similar beings were created there.[10] Blizzard originally planned to introduce an all-new reptilian race that would have resembled crocodiles or alligators more than lizards, with the reasoning that the nearby tol'vir would have had to create a bulkier version of the saurok to combat the dinosaurs of Un'Goro. However, it was eventually decided to simply use the pre-existing saurok instead.[11]

While traveling through an Un'Goro marsh, Professor Doyle and Eddie Malone were briefly captured by saurok before they were rescued by a group of tortollans.[12]

Progenitus may have been the first saurok created by the mogu, judging by his name and his title, <The Firstborn>.