Somebody stole a recipe from a pirate named Stinkbraid, and strange things started happening to those who made the delicious dish. When you try Savory Deviate Delight, beware of flipping out. Or turning into a pirate.[1] 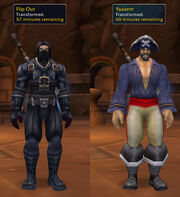 This item is created with Cooking (85); taught by

Eating a Savory Deviate Delight randomly has one of these two effects:

In earlier patches, Savory Deviate Delight also bestowed a number of other possible effects, including "fake death," a short-term Fear effect, and a rapid-cast buff. Some players misused the Savory Deviate Delight's Fear-like effect to glitch their way past closed gates such as those in Blackwing Lair.

Druids, Shamans, and Warlocks lose the effect when they change forms.

For non-humans, certain emotes change while Flip Out or Yaaarrrr are in effect. These include /cry, /laugh, /cheer, /chicken, /yawn, /train, /silly and /sigh which are all replaced by the human versions.