Sayge is a level 55 buff vendor (free) and quest giver associated with the Darkmoon Faire.

Sayge is a gnoll and is one of the few gnolls that are not hostile. Asides from being neutral he has also been able to learn to speak full Common. 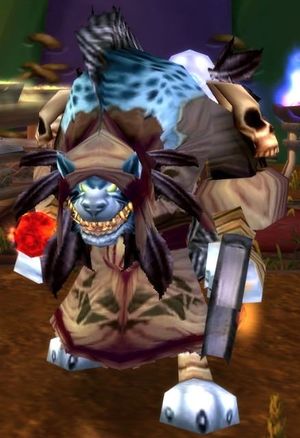 Silas Darkmoon especially values Sayge as a clairvoyant and considers him one of the best he's ever seen.[1]

A new game called Whack-a-Gnoll was introduced on Darkmoon Island and is quite popular with the other carnies, but Sayge (for obvious reasons) isn't too fond of it.

He offers these quests monthly (can only be done once a week due to the Faire being in Darkmoon Island once a month). 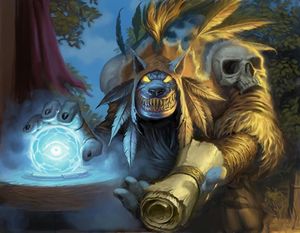 Sayge from the Trading Card Game

Sayge will buff you and tell you your fortune for free, all you have to do is answer his questions. He asks two questions with multiple answers, after which he buffs you. The buffs are linked to which answers you choose; so if you desire, you can specify the buff reliably, see Sayge's Fortunes. The buffs last for 2 hours, and the cooldown between receiving buffs is even longer.

After you answer Sayge's questions and he has just buffed you, he asks you if you want a written fortune. You can turn Sayge down, but assuming you accept, you get a soulbound fortune cookie-like fortune item in your inventory (must have a free slot). (See Sayge's Fortunes) Right click to open it (the result is an opened soulbound fortune item), then mouse over it to read it.

Four of his fortunes were quest items which started the following quests: 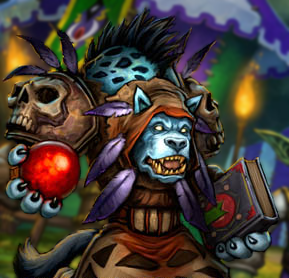 I have long known you'd seek me out, <name>.

Every sentient being in this world is driven by the choices they make. Choices begat further choices, and these in turn make someone who they are. This is where your fortune is drawn from - who you are, and the choices you make.

All fortunes can be discerned for those who know the way.

Are you ready to discover where your fortune lies?

I am ready to discover where my fortune lies!

Your fortune is cast, <class>. For the next few hours, you will find your spirit in tune with your true nature. Be careful, as your fortune - and your fate - are never as clear as you might think them to be.

If you would like a small glimpse of something to ponder in your future, by all means let me know. I'd be happy to give you a written fortune, provided you have room in your inventory. It is one drawn from the insight you have shown in answering my questions.

I'd love to get one of those written fortunes you mentioned! I've got the space in my inventory for it.

Here is your fortune, <name>. May it serve you well.

Alas... I am sorry to say I cannot currently give you your fortune, as you have recently received a fortune reading from me.

Return to me several hours from when you first received your fortune. The forces of Fate will have properly recalibrated themselves, and I will be able to see into your future.

Sayge is an homage to the classic Ultima series of role playing games. In Ultima IV, V, VI and IX, the game began with a meeting with The Gypsy fortune teller, and your answers to her moral dilemmas determined the stats your character would begin with.

He may be from the Shadowhide, Palemane, or Mudsnout clans of gnoll, based on his coloration.